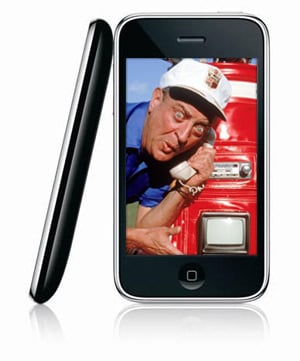 If you’re an iPhone 3G user, the iOS update to version 4.1 can’t come soon enough. Because of a mixup over at Apple UK, we know the update is probably going to hit us on Wednesday, September 8th. Although, if you ask Apple for the official word, all they’re going to tell you is ‘it’s coming soon, now calm down son. Have you seen the new iPod Nano? You should buy one.’

I too have a trusty old iPhone 3G that I use over here, and ever since I upgraded to iOS 4, the device has been… well… it’s been a living hell. Doing anything on the device has been more than a challenge. It runs slow as molasses, apps crash constantly (including Mail), and yes, more than once I considered tossing the device against the wall. In a nutshell, iOS 4 on the 3G has been the biggest disappointment I’ve experienced from Apple since… well… since forever.

No doubt we’re all going to keep our fingers crossed that iOS 4.1 brings the goods and releases the shackles 4.0 seems to have on the 3G. From all early reports that I’ve heard and read (testing via the gold master), the results are good. Performance is back up to speed, crashes are a thing of the past, and happy iPhone 3G users should be spotted all around the globe. At least, that is the hope.

If you have an iPhone 3G I’d love to hear from you and your experiences with iOS 4.0. Has it driven you crazy? Did it drive you to pick up an iPhone 4? Or worse yet, driven you to give up on Apple altogether? Whatever the case, I’m hoping for a happy ending this Wednesday when iOS 4.1 should be released. We’ll have to stay tuned for confirmation on this, but me thinks that should be the date.

Tip: If you’re on an iPhone 3G with iOS 4.0 installed… here’s a tip. Try turning off your Spotlight search options. I’ve found it helps a little bit.

If you caught my iPhone 5 concept design the other day, it no doubt got your heart pumping. That, or...