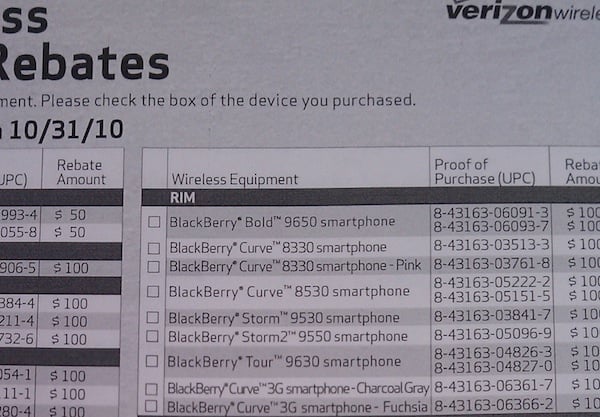 If you’re looking for more BlackBerry Curve love on Verizon, it looks like that’s just what you’re going to get in the near future. Via a rebate form obtained by our friends at CrackBerry, it looks like the Curve 3G 9330 is headed to big red in charcoal gray and fuchsia. No release date was found, however the rebate on the sheet is set to end on October 31st. Do a little math and one can estimate a launch. Pricing should hit us at $100 with the noted rebate, but we’ll see.

Should also be interesting to see if the Verizon Curve 3G launches with BlackBerry 6 or OS 5.0. The latter would be the safest guess, as I’ve heard Verizon is still hard at work approving BlackBerry 6 for the 9330.

So, in a nutshell… look for the BlackBerry Curve 3G (9330) on Verizon later this month or early October. Pricing should be around $100, and we’ll probably see OS 5.0 preloaded, with an update to OS 6 in the months ahead.

Not sure if anyone out there is excited about this at all, but if nothing else, it brings one more BlackBerry option to the table for Verizon customers. Stay tuned for more!

If you're an iPhone 3G user, the iOS update to version 4.1 can't come soon enough. Because of a mixup...