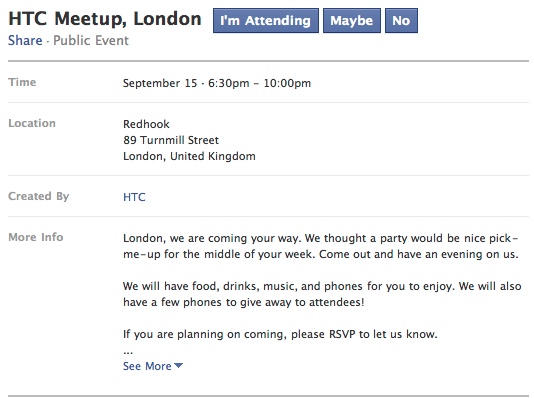 HTC confirmed its rumored September 15th event in London via Facebook today. Not an exclusive press event at the Hyatt Hotel, this gathering is a casual party at Redhook that is open to the public. Though the handset manufacturer hints that it will have phones on display and a few to give away, it does not mention a launch event or any new tantalizing details that would entice the press.

This weekend, the tech world was abuzz with rumors of an HTC-sponsored September 15th event originating from Smarthouse.com.au. The event would launch the HD3, a purported 4.5-inch handset with a dual-core 1.5GHz processor, Windows Phone 7, 1GB RAM, 4G connectivity, HDMI out, and 8-megapixel camera. In addition to the HD3, HTC was also expected to launch its tablet lineup at this rumored event.

Though tantalizing, these specs are not entirely correct. The specs are apparently lifted from a concept device designed by NAK, a phone designer who lives in the world of virtual phone mock-ups. NAK phone design dreamt up the HTC HD3 and listed the imagined specs, which were repeated, almost verbatim, by Smarthouse.com.au.

The Australian source of this hot story also cited the model number, 6HTHD7XM and attributed it to the HD3. This number comes from an internal O2 UK document that leaked last week. The leaked spreadsheet cited the 6HTHD7XM model number and attributed it to the unknown HTC HD7 handset, not the HD3. These two inconsistencies, coupled with the revelation that the event is for the public and not the press, call into question the original HD3 launch rumor.

Now, it is possible that HTC is hosting two events in two separate locations within London on the 15th. It is possible, but not likely. It is more likely that the source is incorrect and this September 15th event is a meet and greet for HTC to show off its latest phones, not to launch its tablet and Windows Phone 7 handsets.

Though I think I am correct in doubting the veracity of this original leak, this is one instance in which I would love to be proven wrong. That being said, is anyone in London going to attend this event at Redhook? Free phones, you know!

UPDATED: A reliable source who will be in attendance has let us know that HTC will be holding a press event the morning of the 15th. The public event discussed above is a follow-up to the press event and is held at a different location. One day, two events, and hopefully lots of hot new handsets.