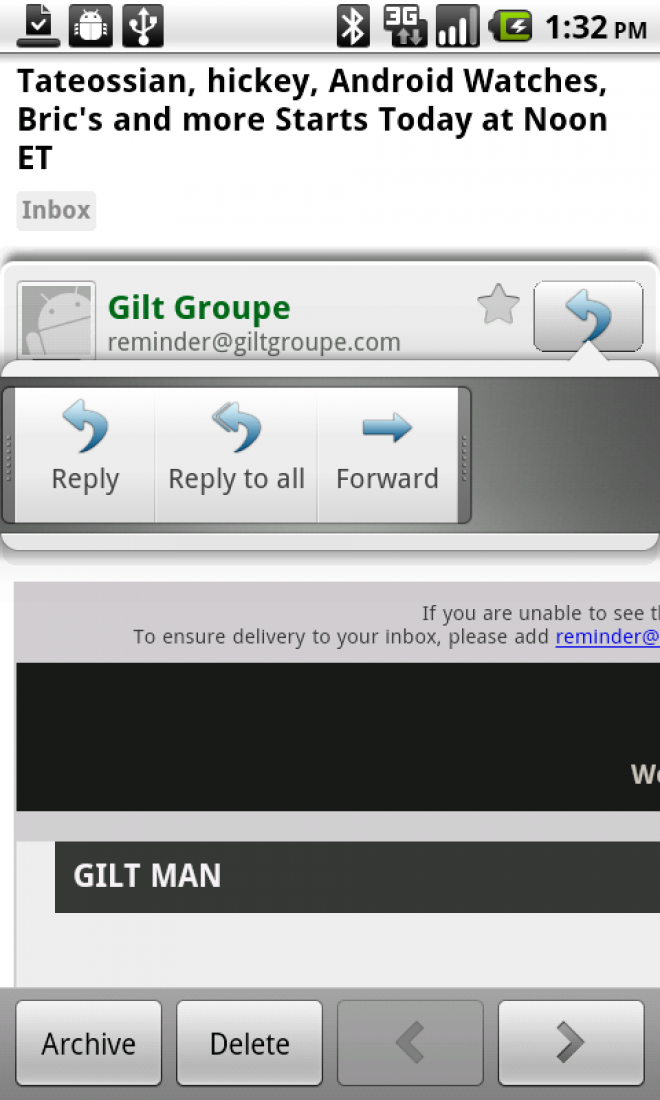 If you’ve got an Android 2.2 (Froyo) smartphone in your pocket, then you have an application update for the included Gmail app awaiting you. A new version of Android’s built-in Gmail application has been found online, and while it’s not a big update, there are a couple of features you may like.

First off, this updated Gmail app may not be new for those who have been flashing custom ROMs onto their device, as the app has been loaded into many of them for some time now. For the rest of you, you’ll find that the new app has rearranged some existing features (like the “Reply” button), in order to make them more accessible. Instead of having to scroll down to the bottom of the message to reply, the option has been added to the top of the email. All you need to do is tap on the button at the top right of  and a small menu — similar to the Quick Contact (introduced in Android 2.1) feature — will pop out and give you the option to reply, reply to all, or forward the message. This is the biggest change in the update as a whole, but the app is also faster overall, according to others.

Since I don’t have an Android 2.2 device, I can’t test the application for myself, so I’m just going on what I’ve heard from others. All you need is Froyo on your device, and there’s no need to be rooted. Just download the .apk file to your Android phone’s SD card, and install with a file manager, like Linda File Manager or something similar. This is just one of the many Google Applications that could really use some sprucing up. Let’s hope that there is another set of Google Applications for Android that will be released at some point soon.

We’re wondering if this particular version of the Gmail application will be included in the T-Mobile G2 when it comes out, as it’s the next Froyo-toting Android handset that will be released, supposedly.

You can grab the updated Android Gmail app here.

Notice any more differences within the application?