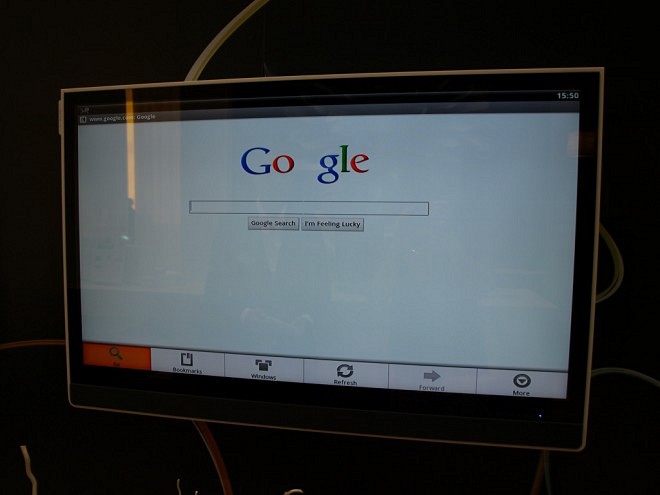 Samsung is setting out to show us that TV tomorrow isn’t going to be anything like TV that we grew up with as it considers building sets with Google’s Android integrated right in. The manufacturer is looking to compete with other TV services, like the ones Sony and Apple are providing, with the ability to access movies, games and other multimedia content online. Perhaps we might even be able to look forward to some Android applications designed for the big screen if this pans out.

“We will have to see, but we are reviewing” whether to use Google’s Android operating system, Yoon Boo Keun, head of Samsung’s TV business, told reporters today on the sidelines of a forum in Seoul. A key question is whether South Korean movie, TV and music providers will cooperate with Google, he said.

It’s not set in stone, but the fact that Samsung is considering this means it is looking to keep its spot at number on when it comes to manufacturing television sets. Using Android, which is an open source platform, for television sets coupled with Google TV as we saw demonstrated earlier this year could be a huge winner for Samsung.

And according to Reuters, Google is setting out to release Google TV this fall in the U.S. and worldwide next year. The timing couldn’t have been any better.

This is also a pretty big deal for Google, always in competition with Apple, as Apple had recently announced Apple TV, which will be selling for only $99. Not only will it have access to Netflix, but customers will also be able to rent HD TV shows for just $0.99 and movies for $4.99.

In addition to throwing in web services and new operating systems into its televisions, Samsung is boosting 3D television production as well:

About 50 percent of Samsung’s 3-D TVs offer Web-browsing features, and the portion will increase in coming years, Yoon said. Samsung will likely meet its sales target for TVs this year and will roll out more lower-priced 3-D TVs next year, he said.

Samsung aims to sell 35 million liquid-crystal-display TVs and 4 million plasma TVs this year, including more than 2 million sets that offer 3-D features. The company, which started offering 3-D sets in the U.S. in March, sold more than 1 million units by Aug. 31, giving it an 88 percent share of the U.S. 3-D TV market.

With Android, access to the web and new apps and 3D television increases on the way, Samsung might be able to retain its place as the number one television manufacturer in the world and keep its competition playing catch-up.

It is official, the Samsung Fascinate from Verizon will make its debut tomorrow online and in stores on the 9th. As...