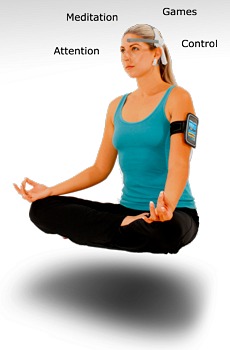 We’ve seen technology that can be moved with brain waves before, but when has it ever been really accessible or useful? Wait, hold that thought. Now train it on your iPhone, iPod touch or iPad as XWave allows you to control certain items on its app with nothing more than your brain waves. The application is used with XWave’s headset which employes NeuroSky technology — or the technology we’ve seen at toy fairs and electronics conventions that has allowed us to control physical objects with our minds.

What can you do with XWave and NeuroSky? Well, you can apparently change colors of an item, which I’m assuming is on the phone, based on your level of brain relaxation. You’ll also be able to levitate a ball by focusing your attention on doing so, though it’s not specified whether it’s a physical or virtual ball. Another thing the XWave promises is the ability to help you increase your attention span; and with Twitter being the center of our microblogging universe, we’ll definitely need some of that.

Still curious? A little skeptical? You can order a unit today for $99 from PLX, which will be compatible with the free iOS app, and it will start shipping in October. We’ll try to get our hands on one and let you know just how well it works! In the meantime, check out the video demo below and get more details on the press release in the next page.