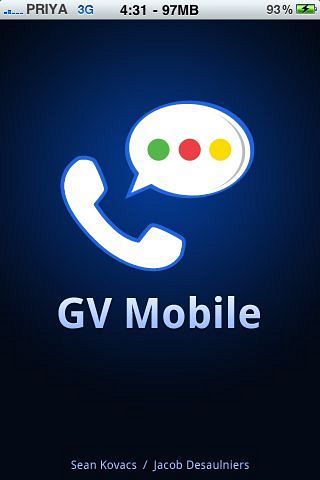 Last year, when Apple still had pretty tight rules when it came to submitting and approving apps to its app store, two Google Voice applications were totally denied. The first was the official Google Voice application, and when it was blocked from the iTunes App Store, everyone became infuriated. Actually, Apple’s official response was that it wasn’t rejected, but it was pending review. We all know how well that worked out.

The second application to get the boot was GV Mobile. It actually got pretty far, but then was removed from the app store last year. Because the app duplicated some functionality of the iPhone, as well as violating some other vague or nonsensical rules, GV Mobile was relegated to the jailbroken market via Cydia.

However, in light of this morning’s news from Apple that it would ease up its stringent app approval process, and become more transparent in the review process to developers, it looks like the app just might have some fighting chance of getting into the app store.

This morning Apple released guidelines explicitly spelling out for the first time what it would reject from the App Store. Sean Kovacs, the developer of third party Google Voice application GV Mobile (which was removed from the App Store over a year ago), read through each of the 100+ rules, and he concluded that his app didn’t seem to violate any of them. He emailed Apple’s approval board to see if he could possible get his app reinstated. The response is encouraging.

I reached out to Kovacs, who says that an Apple representative responded that given the new guidelines released today he was welcome to resubmit GV Mobile for review. Which is a much better response than he’s been getting before now (radio silence).

It seems that odds are largely in favor of Kovacs and his app. If priced accordingly, this could be a huge opportunity for Kovacs as tens of thousands of people would undoubtedly download the app. Why the presumption? Several notable iPhone users and technology journalists publicly lashed out at Apple last year and left the iPhone platform for Android simply because the Google Voice app was not approved.

It hasn’t been approved yet, but the fact that GV Mobile actually has some hope of being approved makes this very exciting news for Google Voice users.