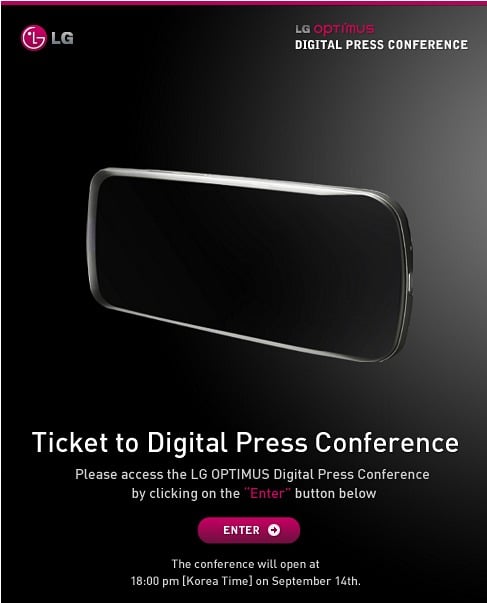 LG is going to be holding a digital press conference next week to talk about some exciting new products and its future smartphone strategy. Of course, we’re talking about the LG Optimus line, which includes both a Windows Phone 7 smartphone and tablet in its line-up. While I was a bit harsh on LG in the past, perhaps this event could prove me wrong and really blow us out of the water.

Here’s what we initially said about the Optimus 7 Windows Phone when it was seen at IFA:

If this is in fact the GW910, you can count on it having a 1 GHz processor, 8 GB of on-board storage memory, GPS, Wi-Fi, a 5 megapixel camera, and will likely be coming to AT&T sometime “early fourth quarter”.  The Optimus 7 has so far been the flagship device for Windows Phone 7, but it won’t be the only one helping Microsoft restart their mobile platform. DLNA is definitely cool, but people replace their home entertainment systems way less frequently than their cell phones; it’ll probably be awhile before DLNA becomes a real attraction for most shoppers.

The impression I get from this coming conference is that the matters discussed could really make or break LG in the North American market, where it does OK in the feature phone department, but not so hot in the smartphone market where real growth and profitability is happening.

Samsung, the other big Korean manufacturer, has already been killing it with its Galaxy S line of devices. In the U.S. alone, it sold over 1 million devices before the Epic 4G launched for Sprint, and well before the Fascinate hit the nation’s largest carrier, Verizon.

Can LG steal some of Samsung’s thunder with its new Optimus Windows Phone 7 and Android offerings? After all, the latter’s GT-i8700 looks like it’s pretty decent hardware and possibly packing some punch under the hood.

Be sure to check out our coverage of the digital event bright and early on September 14, and we’ll be sure to keep you abreast of all things LG Optimus!

With the upcoming flood of Android tablets set to hit the market this year, you'll soon have many choices at...