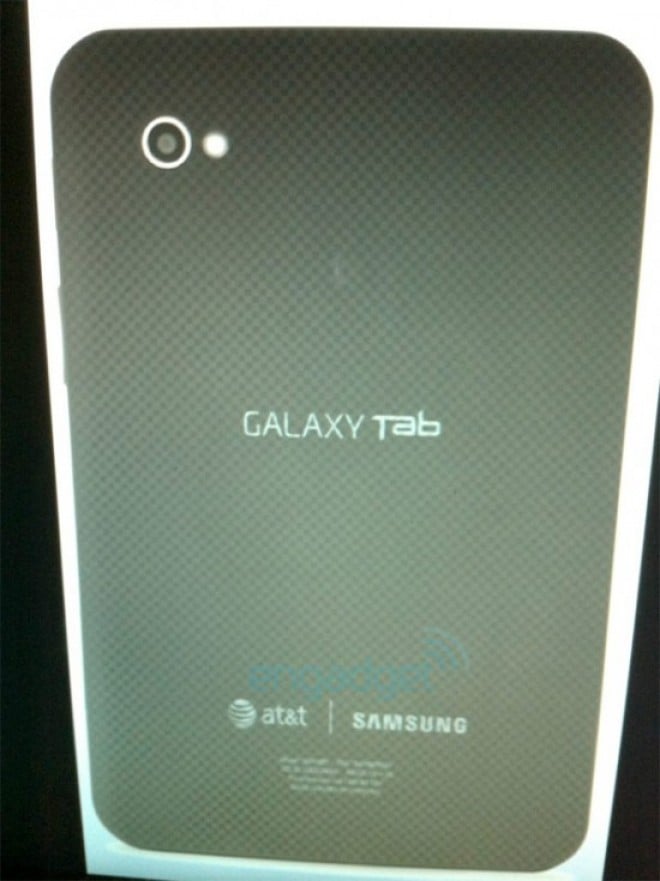 As expected, the Samsung Galaxy Tab should be hitting AT&T, along with Verizon and Sprint. While no carrier has confirmed the Galaxy Tab’s availability, the Android tablet has been spotted with the AT&T logo on its backside.

The Galaxy Tab will join the Dell Streak and the iPad at AT&T, and even though we can expect more tablets from different carriers, it has some catching up to do. If you do consider the Dell Streak as a tablet, that makes AT&T up three, with everyone else at zero. Of all carriers to bring the fight, Verizon has got to be the one, and the rumored Motorola Android tablet may be just what Big Red needs to combat AT&T’s offerings.

Now, what carrier will actually launch the Galaxy Tab first? AT&T gets a nod, as they already have an existing portfolio, but it’s still anyone’s guess. We’re just happy to see some carrier-branded pictures floating around, with a launch expected any day now. We’d really like to see a WiFi only version of the Tab, but that doesn’t seem to be happening anytime soon. If the Galaxy Tab doesn’t sport the rumored horrendous price unsubsidized, I may grab one and patiently await a Cyanogen Mod 6 port to the tablet.

Here’s to hoping AT&T will indeed see the Galaxy Tab sometime very soon. Though, if you’re a speed demon, we’d tell you to wait for the Sprint variant to come out, as it may come with their “4G” support. Missing from the tablet wars is T-Mobile and we’re hoping they jump in sometime soon. When Big Blue launches the Galaxy Tab, they will have the biggest selection of any carrier, even though it’s only three devices, but all varying in sizes from 5, 7 and 9.7 inches. It’s hard to argue with the choices AT&T will be offering and we’re patiently awaiting Verizon’s answer.

Another tidbit from that Nielsen survey last week is that a whooping 33% of Android users had opened an in-application...