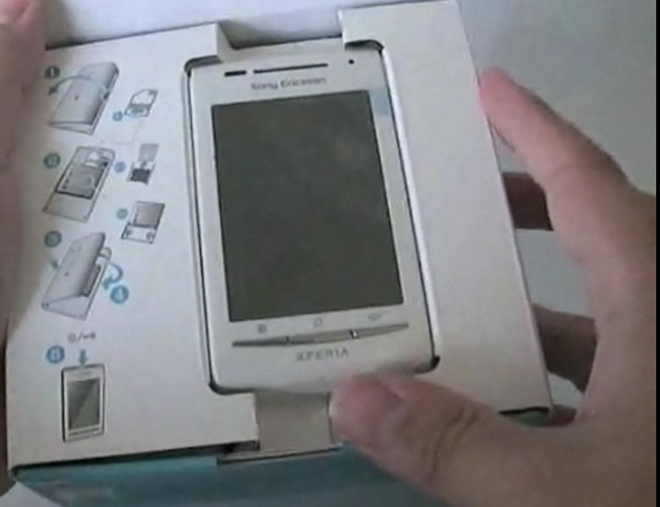 Hey, remember the Sony Ericsson Xperia X8? It’s a slightly bigger version of the X10 Mini that was due out sometime in third quarter (which is rapidly coming to a close). One reviewer managed to get their hands on a fresh box, revealing a bunch of battery door covers that come shipped along with the phone and the usual fare, like charger, documents, and headphones. The SIM card slot and microSD aren’t under the battery, which is always nice. The software seems to be running smoothly as ever, and pretty much identical to what we had seen in the Mini and Mini Pro.

The Sony Ericsson X8 isn’t what you’d call a heavyweight – 3″ 320 x 480 display, 600 MHz processor, 128 MB of RAM, 3.2 megapixel camera without flash, GPS, Wi-Fi, 3G, and Android 1.6. Personally, I found the only time Sony Ericsson’s smaller handsets worked was with the Mini Pro, since a physical keyboard is nearly a necessity with a screen that small. Still, the virtual keyboard wasn’t bad by any means, and the unboxing video demos both porrait and landscape virtual keyboards working just fine. Android 1.6 will make some people think twice about picking it up, but Sony Ericsson has confirmed that they’re working to get 2.1 on the X10 family by the end of the month.

The X8 isn’t an especially exciting phone, but it’ll be a nice compromise for those who found the X10 too big, and the Minis too small. Considering the X8 passed through the FCC not long ago, it’s probably safe to assume it’ll be out on the market soon, but we’re still in the dark as to which carriers will be picking it up. In the meantime, here’s the unboxing video.

Vodafone announced a restructuring plan on Thursday that will group its minority holdings into a single, but separately managed unit....