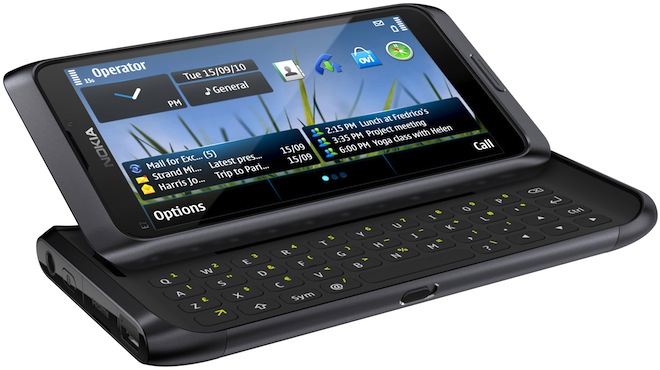 Anssi Vanjoki was on stage at Nokia World this morning to announce a range of Symbian^3 smartphones, and the biggest, meanest, baddest of the bunch is the E7. It has a 4 inch screen, will ship by the end of this year, and cost 495 EUR before taxes and subsides. It’s expensive, sure, but what do you expect for the successor of the E90 Communicator that’s now 3 years old? It’s a high end business phone, which means it’s meant for people to travel the globe, and they’re not going to have any problem getting reception with 3G 850/900/1700/1900/2100 MHz support and 2G 850/900/1800/1900 MHz support. The 3G is capable of 10.2 Mbps down and 2.0 Mbps up.

Other practical things to know: 3.5 mm headphone jack, 802.11 b/g/n WiFi, Bluetooth 3.0 support, 8 megapixel camera, HD video out … if this sounds familiar to you that’s because it is. The E7 is nothing more than an N8 with a larger screen and a QWERTY keyboard. Typically Eseries devices look far different compared to their Nseries brothers and sisters. Classier, built better, and with additional software tweaks. It’s hard to judge a device I haven’t played with, but the N8, which I’ve had a go at on numerous occasions, feels like a large device even though it has a smaller screen than my Google Nexus One.

The E7 comes in at 176 grams and it’s dimensions are: 123.7 mm tall x 62.4 mm wide x 13.6 mm thick. The 4 inch screen, like the N8, has a resolution of only 640 x 360 pixels. It also comes with a 1200 mAh battery that promises to give users up to 9 hours of talk time and 18 days of standby if they switch off 3G. JoikuSpot comes built in, alone with a whole bunch of other software, but JoikuSpot is the most important since it turns your device into a mobile WiFi hotspot similar to Google Android 2.2.

More analysis over the next few days.

Update: I forgot to mention this device has 16 GB of storage built in. It’s also got a microSD card slot so you can potentially carry 16 GB + 32 GB in your pocket.

Nokia is kicking off their namesake conference today with the Nokia World keynote in London, UK. The Finnish mobile phone...