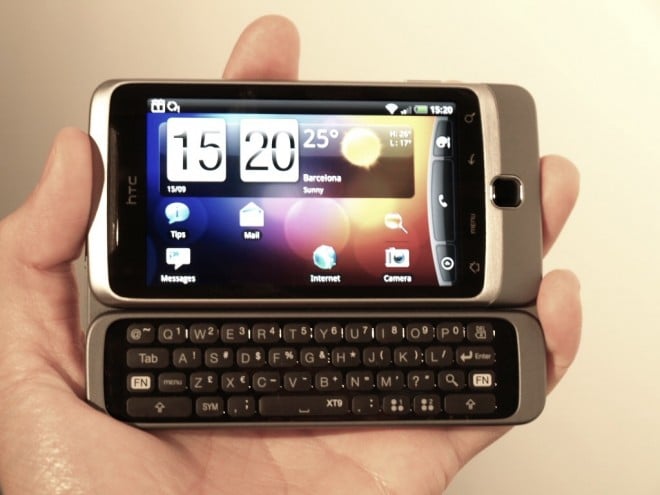 HTC didn’t just launch a revamped HTC Sense UI, a new HTC Desire HD smartphone, and the HTCSense.com cloud-based phone management service, the smartphone maker also unveiled their new keyboard-toting HTC Desire Z smartphone. The Desire Z runs Android 2.2 Froyo but makes use of the new Sense UI. The Desire HD isn’t as powerful or feature-packed as the Desire HD, but the finger-friendly keyboard, which is as good as it gets in the Android space, makes the DHD a good fit for those of you that like to use a physical keyboard to tap out longer emails and text messages. Contrary to the headline above, the “Z” in the DZ is actually a reference to the unique hinge design for the flip-out keyboard. More on that below.

The HTC Desire Z sports lesser specs than the DHD, but it’s in no way a lesser phone. Comparing it to the DHD would be like comparing apples to oranges, to beat a tired metaphor into the ground. Seriously, they are not the same phone and should really be considered differently. The point of the DZ is the keyboard. HTC designed the keyboard with the typing experience in mind. There’s a lot of space above the top-most row of keys, so you don’t have to cram your fingers up against the top case when typing on the top row. The keyboard also support keyboard shortcuts, just like your computer – for instance, just hit “r” in an email to instantly start replying.

So, what’s up with the “Z” in the model name? Well, it has to do with the unique flip-out hinge that reminds us of the Nokia E7’s hinge. Rather than simply slide upwards, the hinge pivots to move the screen upwards in an arc-motion. The hinge is supported by small but sturdy metallic pieces that don’t exhibit any wiggle or play. It really is solid.

And, speaking of solid, the DZ proves that high-quality construction need not be the domain of aluminum unibody smartphones. Sure, the DHD is an incredible piece of aluminum unibody kit, but the DZ is also just as well made. There are metallic components throughout the DZ, but it’s mostly made of high-quality plastics. Fit and finish is top notch and should satisfy even the most demanding techno-geeks out there.

The Desire Z also sports the new Sense UI. That means you get access to the HTC Locations app, which allows you to download map data ahead of time, so you don’t have to rely on spotty wireless data connections to pull down map data in the field. It also integrates with HTCSense.com, so you can remotely locate, message or wipe data on your DZ, should you forget it at a restaurant or bus stop. Of course, with the new JIT compiler in Android 2.2 Froyo, you won’t be left wanting for speed on the DZ.

Finally, one of the stand-out “features” of the DZ is its ability to almost instantly boot up. We put “features” in quotes because it’s not one of the features listed in the specs-sheet, but is still so cool that we had to mention it. From a cold boot, it took the demo DZ that we played with no more than 5 seconds to fully boot up. We know of no other smartphone that can fully boot that fast. Check out the beginning of the hands-on video to see what we’re talking about.

Study: Android Will be Number 2 Platform Before 2011, Challenge Symbian by 2014

A recent study from Gartner is forecasting mobile platform market share up to 2014, and echoes the results of earlier...