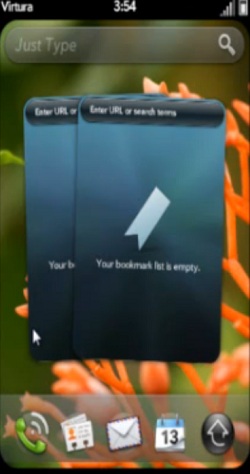 We know that Palm has released webOS 2.0 to some select developers and it was only a matter of time before one of them put up a video.

We’ve seen some of these features before but the walk-through video shows some interesting features. The video below is taken off a computer, as the developer is running webOS 2.0 off an emulator.

Some of the new features that stand out is that there some new notifications and the built-in apps like the dialer appear to have much more polish. As we’ve seen before, the cards will now be able to be dragged on top of each other into stacks for better management of multitasking.

Unfortunately, it looks like the native Dropbox integration isn’t going to happen. Earlier screen shots made us think this would be the case but this video makes it clear that this is just Quick Office, which supports Dropbox and various online storage services.

Other than that, it doesn’t look like too many superb new features to webOS 2.0 but I don’t think that’s necessarily a bad thing. I always felt Palm webOS was the best 1.0 smartphone operating system out there and it just needs a few polishing to catch up to the competition. The next version should also have the Palm webOS PDK integrated in too, which should make 3D gaming easy to do.

Of course, we’re still anxiously awaiting some delicious hardware to run Palm webOS 2.0. Hewlett Packard, which now owns Palm, said we can expect multiple webOS products over the next 12 months. This should include smartphones, next generation printers and the much-vaunted tablet, which could be called the PalmPad.

Go ahead and check out the video below for a walk through but be warned that the music that accompanies it is weak sauce. Let us know what you think of the 2.0 version in the comments.

Update: The YouTube video was taken down by the creator but Engadget got their own version that should still be up.

The Mobile Roundup – The ‘Here I Am’ edition

This was a big week for sharing where you are, as Facebook Places was officially introduced. We also saw the...