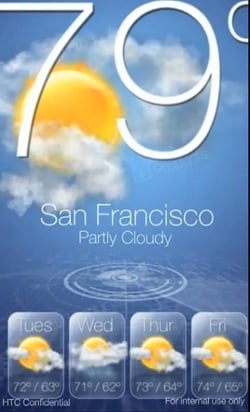 This may be one of those “too goo to be true” things but a video has leaked out which could be HTC’s version of Sense for the upcoming Microsoft Windows Phone 7 platform.

The video, which is stamped with “for internal use,” shows off the custom stocks, notes and weather apps. The overall Metro UI of Windows Phone 7 hasn’t appeared to change much but HTC is making these individual programs shine.

The HTC apps appear to have a lot of animations to add along with the functionality. Some might say it’s a bit too much flash but I’m already digging it.

As Microsoft Windows Phone 7 gears up for its Oct. 11 debut, the pieces are slowly falling in to place. The platform went gold and went to handset makers a few months ago and the developer tools are now ready to go.

As for the hardware, it looks like we’ve seen some leaks from all the launch hardware already, as we’ve seen numerous spy shots of Windows Phone 7 devices from HTC, Samsung, Acer and others. I’m personally really excited about the Dell Lightning – that form factor looks like a winner in my eyes.

We’re working on our side to get some more pre-release units, so you can be sure we’ll have the good once launch day approaches.

As I mentioned before, this video could very well be a fake but you should check it out below. Let us know if you think it’s a fake, as well as if you’re looking forward to Windows Phone 7 in the comments.

The Microsoft Windows Phone 7 platform is just a few weeks away and the company is definitely jazzed about it...