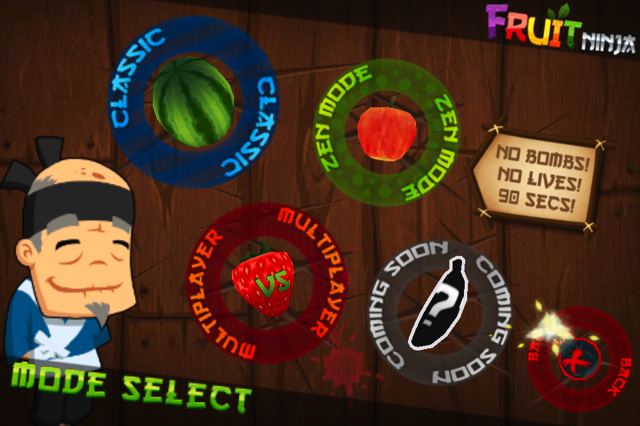 Halfbrick’s Fruit Ninja has just received an update which will allow players to challenge other iPhone wielding wannabe ninjas to a head-to-head battle online to see who can slice up more fruit. Each player will have their own colored fruit to slice. Fruit highlighted in blue is fruit you can slice up and doing so will allow you to score, while red highlighted fruit are for your opponent, which if you accidentally slice, will result in a loss of points. There are also white highlighted fruit which are up for grabs by either player, which can result in some frustrating moments if your opponent is a faster slicer than you are.  Through my time with the online multiplayer, the game worked very well with its response times to both mine and my opponents slices as well as being able to find an opponent through matchmaking with very little effort.

The update is of course free to those of you who have already purchased Fruit Ninja on the iPhone. If you don’t already own it, it’s available for only $.99 on the iTunes App Store. An iPad version is also available, but since Game Center hasn’t been released yet, you’ll only be able to play local multiplayer.

Now if Halfbrick can only find a way to make Monster Dash an online multiplayer game.

It's Friday, so I thought I'd share a cool deal I've found for the Splashtop app for the Apple iPad....