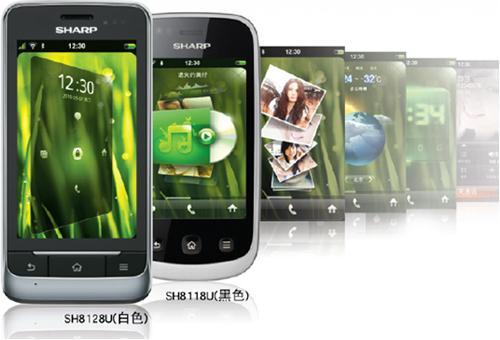 Last week, former Google China head, Kai-Fu Lee, confirmed that he is launching a new mobile OS called Tapas. Similar to China Mobile’s OPhone OS, Tapas is based upon Android and is designed specifically for the Chinese market. It includes software that identifies the geographic origin of incoming calls and syncs with popular Chinese social networks. Tapas also features an advanced karaoke-style music player that identifies songs and displays their lyrics on-screen and an e-book reader optimized for use on a subway.

Sharp is a hardware launch partner for this nascent mobile OS and introduced its first two Tapas-powered handsets, the SH8128U and SH8118U, earlier this week. The Sharp SH8128U is a mid-level offering with a 3.5-inch WVGA (800×480) display, 5-megapixel camera with autofocus and flash, W-CDMA/GSM connectivity, Bluetooth, WLAN, microSD expansion, and a 600MHz Qualcomm MSM7227 processor. Sharp will release the SH8128U starting in October with a price tag of $475.

The Sharp SH8118U is an entry-level offering that shares the same underlying hardware as the SH8128U, including its 600MHz Qualcomm MSM7227 processor and 5-megapixel camera with autofocus and flash. The SH8118U takes on entry-level status by downgrading from a 3.5-inch to a 3.2-inch HVGA (480×320) display. Also available starting in October, the Sharp SH8118U will be priced at a reasonable $355.

[Via Akihabara News and Sharp]

Let me let you in on a little secret. While your favorite mobile operating system may be the one with...