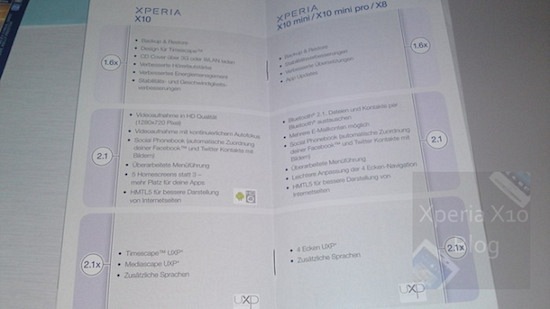 Sony Ericsson fans were probably sorely disappointed when the Xperia X10 finally hit the states, but was sporting Android 1.6 — well behind all the newer, hotter Android handsets. After all, the X10 was announced last November and seemed to have all the time in the world before its recent launch. A leaked roadmap for the Xperia line shows an Android 2.1, or Eclair, update in the future, but nothing more.

The 2.1 update will be bringing some much needed features, however, such as 720p HD video recording, HTML5 support, five homescreens and updates to Timescape and Mediascape.

Additionally, the Xperia X10 mini, Mini Pro and X8 will also be getting the somewhat newer version of Android, but that’s about it. There is no mention in the roadmap of Android 2.2 Froyo being in the works or in the plan. While this doesn’t necessarily mean that it’s impossible, it certainly does make it look rather improbable.

Unless Sony Ericsson has something else up its sleeves for the smartphone market, and I’m hoping that it does even for nostalgia’s sake, it isn’t going to be moving many handsets with antiquated versions of the Google OS. It also goes without saying that SE has no fighting chance in the smartphone market unless it has some killer superphones in the works.