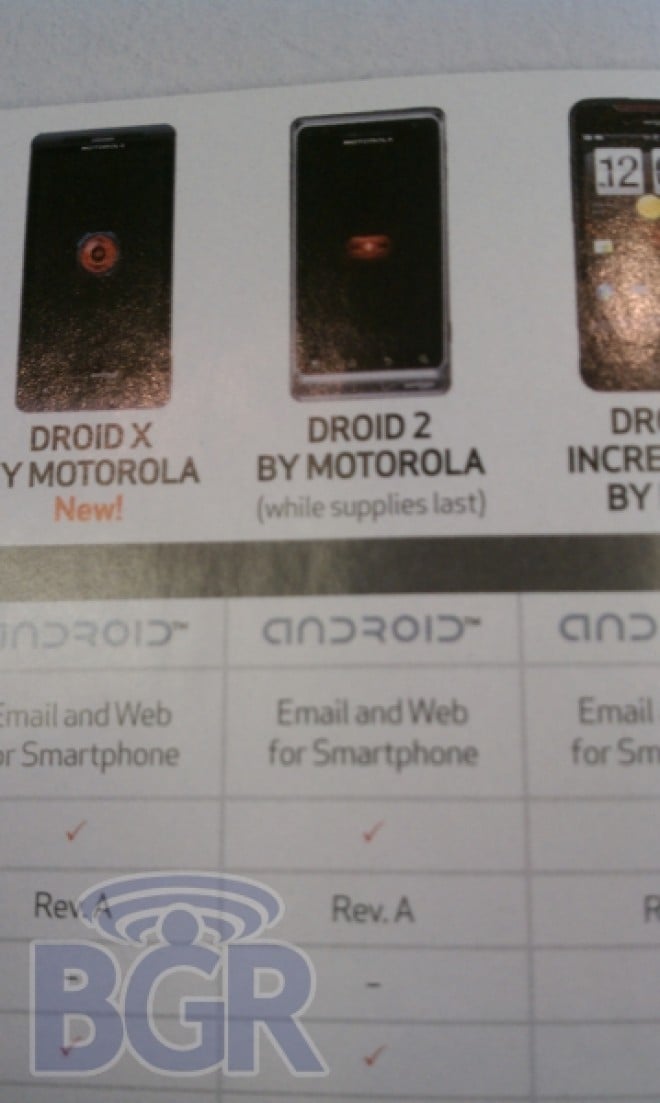 We first got word of the Droid 2 world edition a couple of weeks ago, and figured that it would become available shortly after the launch of the CDMA-only version of the Droid 2. Well, we have an update for you – if this new rumor turns out to be true, Verizon may be scrapping the CMDA-only Droid 2 altogether, and will instead sell only the world edition version of the Android smartphone.

This may leave many customers who pulled the early-adopter trigger feeling a bit burned by Big Red. We have no date as to when this may be happening, but if the picture above shows us anything, Big Red may be trying to deplete their existing inventory of the CDMA D2’s as we speak.

We’re also wondering if Verizon will offer some sort of trade-in program, as anything is possible, but we don’t think that’s very likely. What will ruffle the most feathers, we believe, is if the world edition Droid 2 is still priced at $199.

The transition would come at an odd time, as the Droid 2 hasn’t even been available for very long. Maybe it was Verizon’s every intention to do this, or perhaps the carrier needed a little more time to get the GSM innards working just right on their latest Android offering. We really have no idea, but the early adopters of the Droid 2 may have just shot themselves in the foot.

But let’s be realistic here – Americans don’t travel as much as the rest of the world, and I believe if this were to happen in another country, like Ireland or Australia (damn all their time off) there would be much more of an uproar. This still doesn’t make it any less of a shady move on Verizon’s part, and they should definitely consider doing something for the legions of customers left out in the cold without a globe roaming-capable phone in their pockets.

Since this is a rumor, we will treat it just like one, and say not to worry. That said, some of you Droid 2owners may want to give Verizon customer service a piece of your mind if this rumor becomes confirmed.

On Samsung Galaxy Tab: ‘Android Apps Are Going to Be a Little Ugly’

Surprise! It looks like the Samsung Galaxy Tab, which will be running the tablet-incompatible Android 2.2, or Froyo, OS, might...