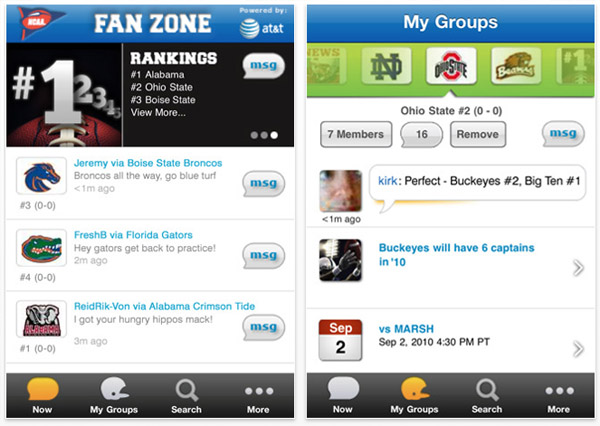 AT&T and NCAA Football launched a new product in Apple’s AppStore – NCAA Football Fan Zone App. Available as a free download for the iPhone and iPod Touch users, the application combines social functionality with real-time NCAA football news. Fans of Division I teams can chat with each other or with fans of opposing teams, as well as stay informed on the latest team and player news throughout the season. Additional features include a live scoreboard, team schedules, discussion groups for weekly rankings and breaking news.

To get started, choose a team or teams you want to track and you’re ready to start discussing and uploading photos related to your favorite team(s) and players.

To spice up the things and make discussions more lively, groups for opposing teams are merged before, during and after each game so that all posts made during that time are visible to both teams. That, however, doesn’t mean the discussion will, let’s say, go in a “wrong direction” bursting with spam and insults — groups are systematically monitored and users can report abuse at any time…

A company called PureSense -- which helps growers solve their water-related problems by providing them with hardware, software and services...