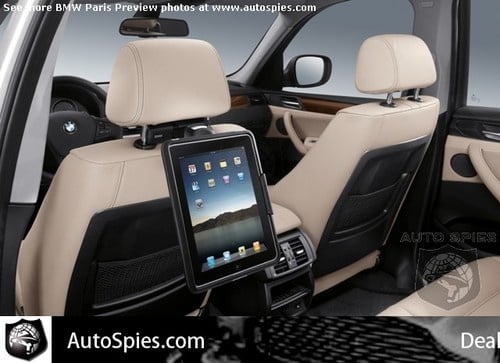 When we think “Apple iPad” or “iPhone,” the first thing that pops into our minds most definitely has nothing to do with the German-made cars from BMW. But, that may all soon change, as BMW is preparing to unveil a couple of new iPad and iPhone accessories at the Paris motorshow next month. The Bavarian automaker apparently has its sights set on cashing in on the iPad and iPhone craze that has become a global phenomenon, and will offer both an iPad and iPhone dock designed to keep the driver informed and passengers entertained. Come to think of it, both BMW and Apple are known for their sleek, minimalist styling, so it makes sense that BMW would look to make the iPad and iPhone an integral part of the “ultimate driving experience.”

First up is the iPad dock from BMW. It’s a rotating dock that hangs onto the back of either the front passenger or driver seat. It’s obviously intended to keep fidgety kids and internet-addicted adults entertained in the back seat on long (and not-so-long) road trips. The idea is simple: provide a sturdy dock that can hold an iPad in either landscape or portrait orientation. Unfortunately, from the looks of the mockup images, the iPad cradle/dock won’t provide power to your Apple tablet – you’ll just have to pick up an iPad car-charger on your own.

BMW also has plans to integrate your iPhone into your car. The BMW iPhone dock supports BMW Link, which is an app that allows your Apple smartphone to integrate with the vehicle’s Bluetooth, audio, and GPS navigation systems. The mockup shows the iPhone cradle essentially replacing the iDrive screen that has long served as the much-criticized centerpiece of the BMW multimedia system, but it’s not clear if the iPhone would simply serve as an accessory or go the full nine yards and completely replace iDrive (or ConnecctedDrive) altogether. We’re betting on the former.

It’s good to see BMW taking a more progressive approach to new consumer technology. The company has offered support for iPhone for years, but has only recently started getting more high-tech with their iPhone integration option. From years-old speculation that Apple would help the carmaker rejigger its multimedia user interface to recent news that BMW will support iPod Out features in its newer cars, it seems that “ze Germans” are getting up to speed with the latest tech gadgets. Finally.

Google quietly announced that it will be bringing some improvements to the mobile version of its Google Docs word processing...