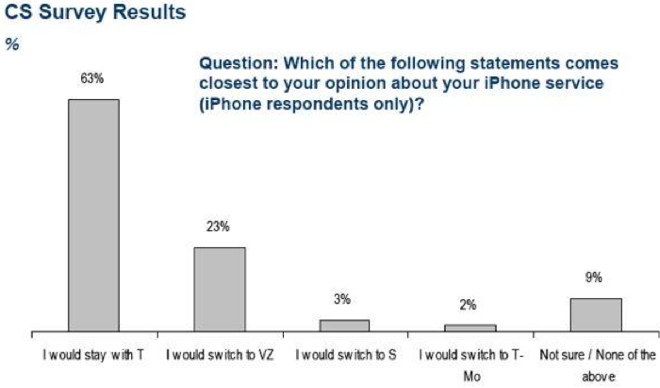 Credit Suisse weighs in with its analysis of the Verizon iPhone rumors and paints a very rosy picture for Verizon Wireless and a not so dire one for AT&T. This optimistic report assumes a February 15th launch date and analyzes all the information that is available from the current crop of VZW iPhone rumors.

While AT&T may lose some customers when the iPhone launches on other US carriers, it may not be a mass exodus as expected. A survey of current iPhone owners on AT&T reveals that 63% would stay because they are satisfied with the service (20%), expect improvement to the carrier’s service (26%), or have a family or corporate plan (17%).

Another 28% would leave AT&T and of those leaving, 23% would switch to Verizon, 3% would switch to Sprint and 2% would go to T-Mobile. AT&T should not be afraid of  customers leaving immediately as 18% of iPhone owners responded they would leave AT&T for Verizon once their current contract expires. Only 3% would break their contract to hop, skip, and jump to Big Red.

Credit Suisse estimates that AT&T will lose 1.4 million subscribers to Verizon, a figure that has been bounced around before, and most customers will jump in the first three quarters of 2011.Verizon could potentially add over 4 million new subscribers in 2011, while AT&T’s net new subscriptions may be flat as customers jump ship to Verizon, Sprint, and T-Mobile to get their iPhone fix.

Credit Suisse also estimates that over 8.1 million Verizon customers are waiting to buy an iPhone from Big Red and most of these individuals will snag the highly anticipated handset in the first year following launch. As a result, most of the hit against AT&T will occur in 2011 and level off in 2012. If the nation’s number two wireless carrier can ride out that difficult first year, then it should be smooth sailing from that point forward for all involved.