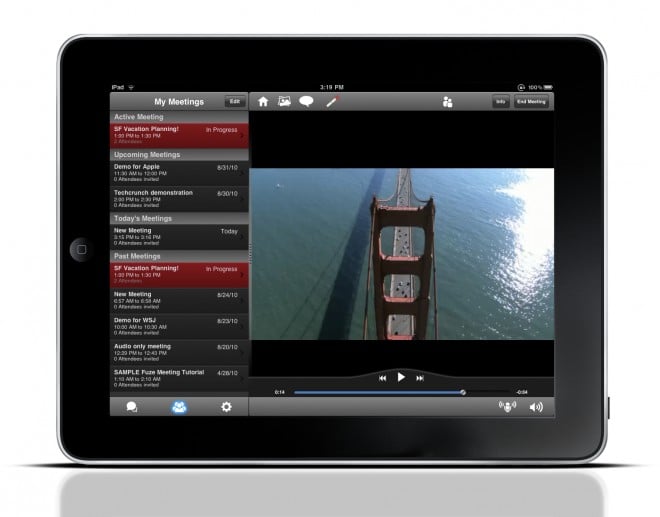 We generally don’t cover too much enterprise applications here because, well, most of those apps are boring. Sure, I understand the corporate needs but many of the apps are just utilitarian and kind of “meh.”

That’s why the Fuze Meeting Apple iPad app stuck out at me because it looks like a useful collaboration tool and it has a gorgeous and usable interface. The app lets you participate in meetings on the go and, unlike other corporate collaborative apps, control the presentations from your Apple iPad.

The Fuze Meeting Apple iPad app takes advantage of many of the device’s capabilities, including the ability to do HD video playback. Also, look for in-app VoIP integration, a federated instant messenger, a laser pointer functionality that tracks your finger, pinch and zoom features, and the ability to grab documents from the cloud.

“We believe that the convergence of faster networks, the power of the iPad and more than ever, the demand of the mobile professional represents the biggest step forward in collaboration in the past decade,” said Jeff Cavins, CEO of Fuze Box, in a prepared statement. “With this in mind, we’ve spent two and a half years perfecting our cloud computing platform which has enabled us to build a loyal user base across iPhone, Android and BlackBerry users, with the iPad being our most exciting launch to date.”

The company already has apps for other platforms but Fuze told me that the Apple iPad could be a major player in the enterprise space because of the screen size and the capabilities of the device. The Apple tablet is still not quite up to snuff for many businesses I know but the coming multitasking with iOS 4.2 should help that cause greatly.

Check out the video below for an example of the Fuze Meeting Apple iPad app in action. It’s free for the first 30 days