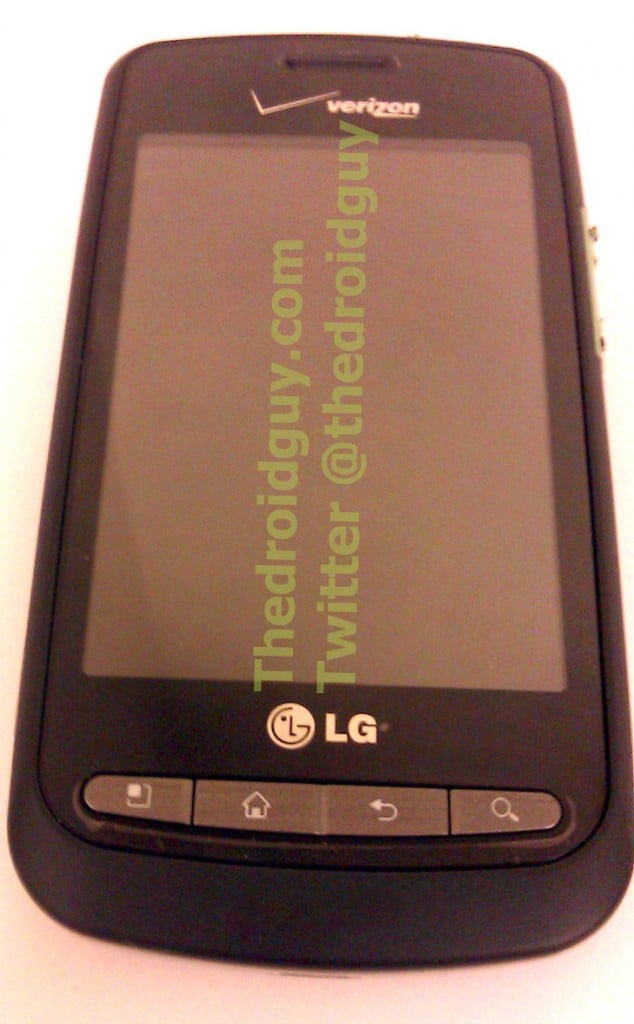 At a press event last week, LG detailed its Optimus One and Optimus Chic handsets, two Android offerings slated to land in Europe and Asia in the upcoming months. This event focused heavily on the Eurasian market and did not reveal any handsets for North America. Before we start shaking our fists at LG for ignoring the North American market, a leak from The Droid Guy uncovers one Verizon offering that may land stateside for the holiday shopping season.

The Verizon Vortex, pictured above, is reportedly similar to the Optimus One and may share some of the underlying specs of its European counterpart including a 600MHz processor, 3.2-inch HVGA display, GPS, WiFi, Bluetooth, FM radio, and Android 2.2. Decked out in Verizon branding, this entry-level handset may  land alongside, or perhaps even replace, the LG Ally in Verizon’s Android lineup. Unfortunately, this handset remains a partial mystery as the launch details are unknown and it has not appeared on any previous Verizon roadmap leaks.

If this leak is correct, then LG is initially focusing on the low-end handset market and releasing affordable Android handsets both in Europe and in the United States. While such a handset may appeal to new Android users, I would really love to see the Korean manufacturer strut its stuff and release a high-end Android handset to rival the Galaxy S or the DROID X. LG promises to bring Tegra 2 powered handsets to its Optimus lineup by the end of the year, let’s hope these high-end smartphones debut worldwide as promised.

[Via The Droid Guy]

Security is something businesses take very seriously, especially today where an idea is no longer worth anything and it's the...