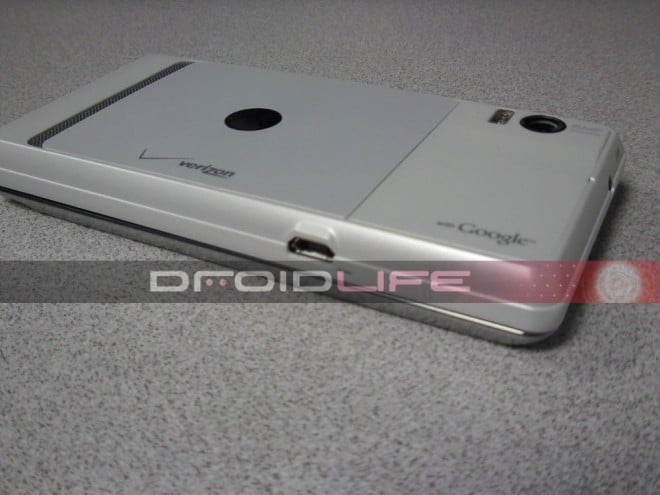 We’re not sure if this is enough to sway you from getting the Motorola Droid 2 R2D2 edition, but we’ve got the first pictures Droid 2 World Edition showing off a new color scheme and a rumored new processor. Not only is the new Droid 2 decked out in a new white-and-chrome color scheme, the new GSM/CDMA globe-trotting smartphone also sports a 1.2 GHz CPU.

The Droid 2 world edition is looking as slick as ever, and the white backing  may appeal more to the ladies who are interested in a lighter Droid. The back of the D2 World Edition almost has an iridescent sheen to it, or it could also just be a very light silver. All previous devices in the Droid lineup have been a dark color, like dark graphite, so the world edition D2, as well as the upcoming R2D2 version will certainly stand out. We’re not sure if the color scheme of the handset would be enough by itself to sway a person one way or another,  but the internal hardware of the device will definitely be something to consider.

Not only does the world edition Droid 2 come with GSM capabilities, according to the system information found on the device, Motorola has blessed the D2 World with a max CPU clock frequency of 1200 MHz. That’s 1.2 GHz, folks, making it the fastest smartphone on any carrier, as far as clock speed numbers are concerned. The benchmark below shows the Motorola Android smartphone topping the charts, and showing a Froyo Nexus One who’s boss. Keep in mind, though, that actual user experience is a different story. We’ve seen the T-Mobile G2 with its 800Mhz Scorpion CPU perform with the best, so architecture of the chipset is also a large factor. We’ll wait to see just how well the faster processor in Motorola’s upcoming D2 variant translates into real-world use.

Still, having that much more speed under the hood may make it easier for Verizon to phase out the D2 that’s being currently sold with this GSM capable variant. That said, I wouldn’t be surprised if this version is slightly more expensive than the $200 you’re going to shell out for the current model.

So if you’ve yet to jump the gun on your new Droid 2 purchase, or you’re still under the 30-day grace period, will you be grabbing the  Motorola Droid 2 World Edition when it launches?

More pics and benchmark below.

If you haven't lost all your free time to Angry Birds for Android, then get ready to lose all productivity...