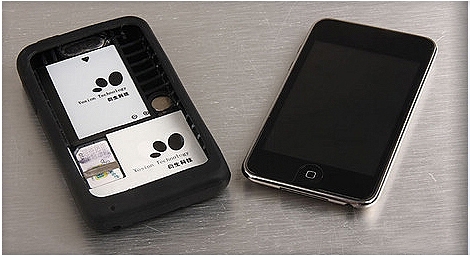 If the Peel sounds familiar to you, it’s because we first caught glimpse of it a few months ago with Sprint branding. The Apple Peel 520 is now shipping for those of you who want to turn your iPod touches into iPhones. The only catch is that you’ll have to jailbreak your iPod touch, which means those of you sporting the retina display model won’t be able to use this for a while. But no worries, we don’t even know when it’s arriving yet.

Go Solar USA has this to say about the new little gadget:

You get more battery life, protection on your iPod touch and phone and SMS capabilities. Best of all is that it will only set you back $60 if you want one of these little bad boys.

Once the jailbreak hits for iOS 4.1, you’ll be able to jailbreak your new iPod touch and pretty much forget about nabbing the iPhone 4 if AT&T and/or contracts just aren’t your thing.

We’ll be sure to keep you updated when the Apple Peel 520 becomes available, but I’m guessing it’s any day now given that it’s begun to ship.

[Update]
Peel520.net just reached out to us with the following:

Peel520.net announced today that it will be the first to sell the Apple Peel 520 worldwide!

You probably heard some rumors about this gadget. Maybe also that ‘Go Solar USA’ will bring the Yosion Apple Peel 520 someday to the USA. Why wait? Peel520.net brings you the Apple Peel 520 directly from China!

Transform your iPod Touch into an iPhone!