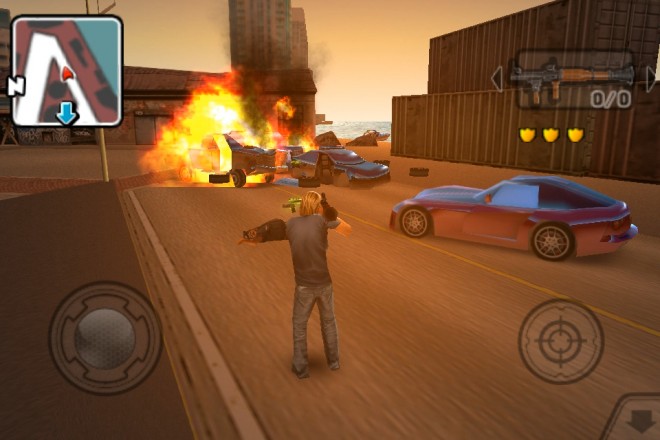 As fun as Grand Theft Auto: Chinatown Wars is on the iPhone & iPad, one thing Rockstar has yet to deliver is a full 3D Grand Theft Auto experience on a mobile platform. That’s where Gameloft’s Gangstar series comes in. Not only has Gangstar: West Coast Hustle been released on both the iPhone & iPad, but it’s also been adapted to the Android market. With that said, Gameloft has announced that the next iteration of their Gangstar games has just been released.

Gangstar: Miami Vindication takes the series to everyone’s favorite US vacation spot, Miami, FL. You play a character who is on a mission to find his kidnapped brother for unknown reasons by the Armada gang. You soon plunge into the Miami gang life in order to save him. You’ll play more than 75 varied missions across a massive open-ended environment that recreates Miami with compatibility for the iPhone 4’s Retina Display. Gangstar: Miami Vindication’s story was jointly written by a scriptwriter from “The Wire” so it might be worth going through its story, or you can just play at your own pace and go on a rampage all over Miami.

As is expected in a Gangstar title, you’ll be able to hijack cars, motorcycles, boats, jet skis, and even a helicopter while arming yourself with some new weapons including grenades, flame throwers, and even Moltov cocktails.. Don’t go too crazy as the Miami PD is always on the lookout for criminal activity and with their improved AI, they might be a force to recon with. If things get out of hand, they’ll even call in the FBI for assistance.

Gangstar: Miami Vindication is now available for $6.99 on the iPhone. An iPad version is also expected to release in the near future. No Android version has been announced as of yet, but I’d say there’s a high probability the game would end up in the Android market soon.

It's not every day you get to see not-so-high-end phones like the Nokia 5230 Nuron getting ridiculously overclocked. The Nokia...