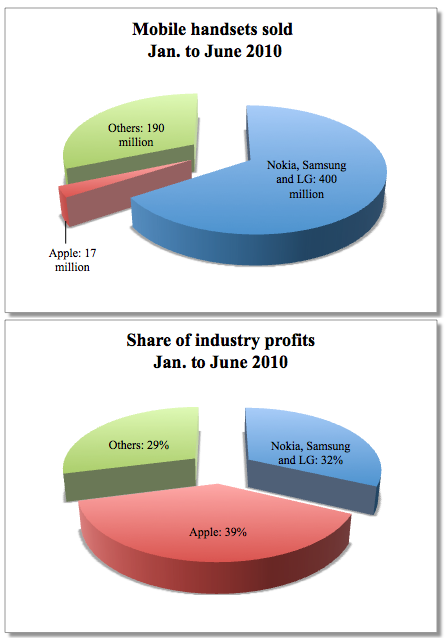 There’s a saying a good friend of mine tells me every time we discuss how to balance your life between work and pleasure. He says working hard is over rated, and that working smart is what you should always aim for. With that in mind, Nokia works hard to manage a supply chain that’s ranked as the best in the world. As seen in the chart above, nearly 2 out of every 3 mobile phones sold during the first 6 months of this year were made by Nokia. Then there’s Apple, who sold only 17 million iPhones, compared to the 400+ million from Nokia, yet in terms of industry profits the Cupertino fruit made more money than the number 1, 2 and 3 handset makers combined.

These charts keep the heads of Nokia, Samsung and LG up at night. How will they dig themselves out of the low margin ditch that only gets deeper and deeper with each passing fiscal quarter? Now of course you’re going to say that Apple only aims for the high end of the mobile market, which is true, and that Nokia has a mission to give everyone on this planet a mobile phone, but then again their mission over a century ago was to make the best paper you could buy in Europe.

Is it time to change goals? When Nokia announced their Ovi brand in August 2007 everyone immediately got it. Millions of devices sold every quarter, plus services which hopefully yield a continuous revenue stream, and boom, you’ve got yourself a profit center that props the company back to greatness. It’s a lot harder than anyone in Finland must have imagined. Cloning Flickr, Facebook, iTunes, by buying small companies that built sub standard solutions compared to the best the online services industry has to offer, and then reselling the rebranded services straight to consumers, was a terribly stupid idea and they’re paying for it now.

Will Stephen Elop, the former head of Microsoft’s Business Software Division, responsible for one of the company’s most profitable products [Microsoft Office], take Nokia to the next stage of their life? Here’s hoping.

Nokia C7 available for preorder, only 60 EUR cheaper than the more capable N8

Nokia, which announced several devices [E7, C7, C6, C3] at their annual Nokia Event last week, and who most recently...