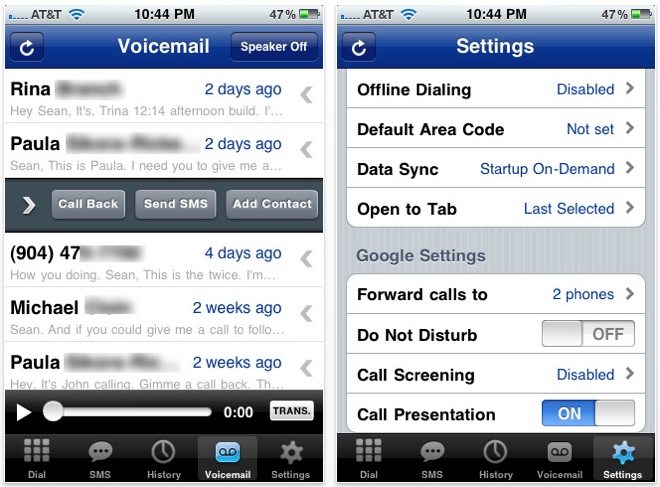 Quick, quick, fire up your iPhone and download GV Mobile +, a Google Voice application for iOS. Developer Sean Kovacs dropped the price of the app from $2.99 to free for a few hours. Time is short as the price will to go back up to its original $2.99 at 1AM EST on September 26th, which for those on the West Coast is 10PM PST on September 25th.

Last week, we heralded the return of GV Mobile back to the Apple app store. Updated and released as GV Mobile +, the latest version of this Google Voice application received approval after Apple loosened the criteria for admission into the app store. If you followed the history of GV Mobile, you will recall that the app was pulled from the app store back in July 2009 when Apple removed all the Google Voice applications for duplicating functionality already present on the iPhone.

Rather than stay stagnant, the GV Mobile app made its way into jailbreaking camp and appeared within the Cydia app store. It stayed in Cydia until this past week; at which point, it made its re-appearance in Apple’s app store, along with other Google Voice apps. Even if you are not sure about this app, all Google Voice users should give it whirl now that is available for free. What do you have to lose?

You can search the app store to download GV Mobile + directly to your iOS device or snag the free version using this iTunes link. Enjoy!

UPDATE #1: Deal is over folks, seems that too many sites posted about the price drop and the developer jacked up the price again. Sour grapes.

UPDATE #2: Sweet grapes? Developer now says via twitter that Apple raised the price, not him. He set the price back down to zero and the deal is reportedly back on. Give the app store some time to update the price.

UPDATE #3: Price is free again. Buy away. You have until 1AM EST.

The iPhone 4 went on sale today in China and the launch was greeted with an enthusiastic crowd of Apple customers. Large...