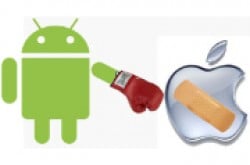 According to a survey from Appcelerator and IDC, Android may be the go-to OS for developers in the future. That doesn’t sound all that surprising as hoards of Android devices continue to hit market, but as of right now, the OS still has has some growing up to do.

This survey was taken by 2,300  developers who use Appcelerator’s Titanium cross-platform compiler to develop Android and iOS applications from the same piece of code. Android held the top spot when it came to the OS with the “best long-term outlook” with 59% of devs choosing the Google mobile OS, opposed to iOS which which was chosen by 35% of devs. But what about right now? Well, right now things don’t look as good for Android, as three out of four developers chose iOS as the best “near-term outlook” and I think it’s really hard to argue with that. Developers also chose iOS as the best revenue opportunity for the time being. That last part is really important, don’t discount it.

It’s easy to believe that Apple’s iPhone, iPod Touch, and iPad will be more appealing to developers when it comes to potential revenue over Android. Google is just now expanding paid applications to different countries, and they still have a long way to go. With only a few exceptions, Android only allows Google Checkout, which requires users to sign up for yet another payment service. It will take cooperation with the carriers to offer users another way to purchase applications, like having the option to buy an application or game and charge it to their phone bill, as T-Mobile has done.

When it comes to the best operating system in other hardware outside of a smartphone, most developers chose the little green robot. A staggering 72% of developers chose Android, with iOS at 25%, when asked about the OS best positioned to power a large number of connected devices in the future. That said, developer interest in Android tablets is still pretty low, as we really haven’t seen too much hardware. Because of this, the iPad took 84% of the developer interest, as far as tablets are concerned.We expect the iPad to be the go-to tablet until it has some decent competition from any operating system, not just Google’s.

May the battle continue, because as Apple and Google are at each others’ throats, in some areas at least, the consumer will win out in the long run.