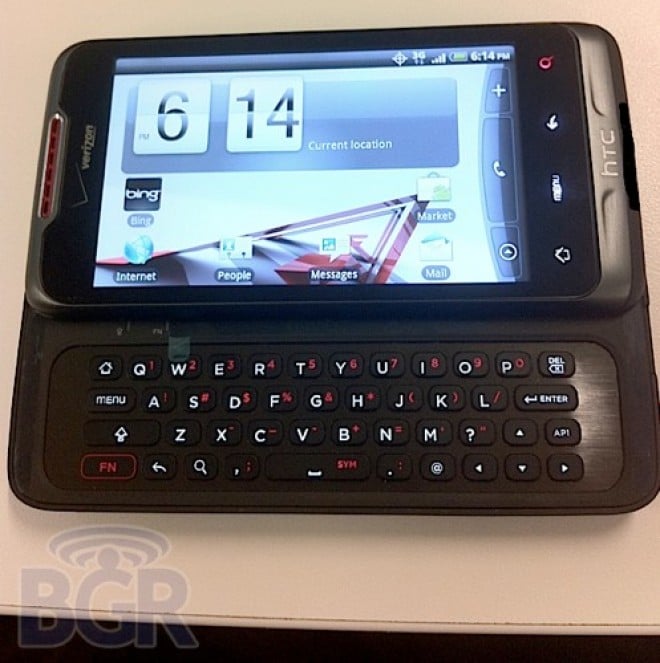 We were wondering when we were going to see more of the HTC Merge, and it looks like that day is today. BGR got its hands of what looks like final hardware of the device, and judging from the pictures, it’s definitely a Droid.

The Merge really just looks like a slightly revamped HTC Desire Z/G2, with the hardware that looks like you’d find in Verizon’s Droid line up. The device is running the Sense UI on top of what we’re going to assume is Android 2.2.

What we do know is that the device does sport a 5-megapixel camera and that Google Search will not be present upon first launch. Instead, you guess it, you’re going to be searching through Bing, which isn’t horrible, but taking Google off of their phone is just plain wrong.

We doubt too many people will be upset by this, though. As long as Bing gets you where you want to go, what’s the problem?

While the Merge is likely just a variant of the G2/DZ  as far as real hardware and internals are concerned,  looking at the keyboard between the Merge and the G2 is oddly quite different. Gone is the symmetry you’d find with the G2, as the Merge only has one function and shift key to make way for four-key directional buttons. This may have been added since the Merge doesn’t have any other navigation method other than the touchscreen, where the G2 has the optical track pad.

The @ button is brought back down near the space bar, and the top left button (where the G2’s @ symbol is placed) is a dedicated Home button, something the G2 lacks. Nonetheless, I still like the G2’s keyboard more, as symmetry is something that’s important to me and I won’t need to hold down one button and reach my hand all the way over the keyboard just to capitalize the letter A.
Check out another picture and let us know what you think.

Other than that, the Merge seems to be pretty similar to the G2. Hopefully this is the beginning of a long string of leaks for the Merge.

According to a recent press release, Samsung has chosen the Atmel MaXTouch touchscreen technology for its upcoming Android tablet, the...