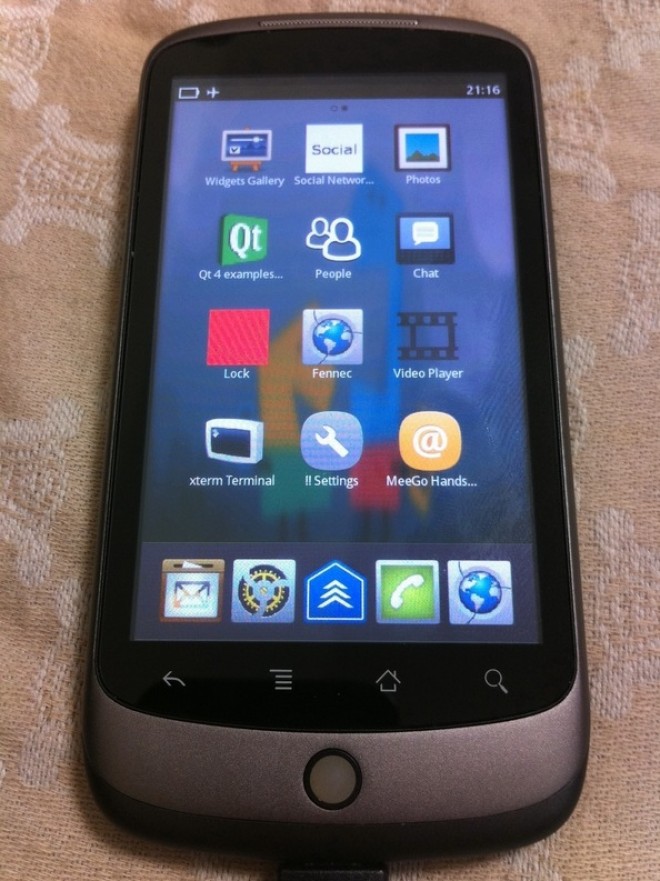 Along with the Nexus One, the HTC Desire and Dell Streak are also in on the fun, but it looks like the Nexus One is seeing the most progress. The picture above does indeed show that developers have gotten the OS up and running, but as far as functionality and usability is concerned, we’re definitely in the dark. The reason the three devices are getting the most focus from the development community is because they all share the same Qualcomm chipset, the Snapdragon QSD8250.

It may be a while before we see a MeeGo port that’s ready for daily use on these devices, as the Qualcomm 3D drivers are not open-sourced, which makes the devices run painfully slow with very laggy response times.  We’re not too sure how this will be fixed, but the Android dev community is quite resourceful, and will likely come up with some work-around in the future.

It’s pretty cool to see that developers are still working hard with the Nexus One. It’s now the go-to development phone for Android devs, so this doesn’t come as that big a surprise, but nonetheless, it’s pretty cool. The MeeGo port will be the third OS ported to the Nexus One, following Windows 3.11 and Ubuntu. Windows and Ubuntu are desktop operating systems, so the experience may not be the best, and is likely just for the geeks who just want to tinker with the phone in such a way.

This project is very much still a work in progress, so don’t hold your breath for a fully functional port any time soon. We’ll keep you updated.