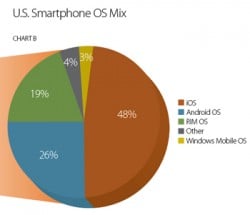 Android is steadily scaling the wall of almost every report we’ve seen lately, and the most recent report from the mobile ad network Millenial Media doesn’t show anything different for the smartphone OS made by search engine giant Google.

Since January, Android’s mobile ad consumption has increased almost 1000%, thanks to the slew of new handsets coming out from every nook, corner, and cranny. Millenial Media’s August report shows that iOS devices are the top dogs with a decent lead, but fell 7% from July, giving them a 48% share of the US market. Android happily lapped that up, and gained 7% in the month of August, giving the Google mobile operating system a total market share of  26%. As the months continue, and more handsets are released, along with the debut of Android tablets, we can expect this market share to only increase.

Much of Android’s success comes from one device. You guessed it, the Motorola Droid. Out of the top 20 phones in the report, the Droid grabbed the number 2 spot, only behind the iPhone. That said, the iPhone accounted for 27.67% of the market in the report, where the Droid stood at 9.44%. You’ll also find more Android devices  filling up the top 20 handsets, including the Droid Incredible, the HTC MyTouch Magic (MyTouch 3G), G1, Cliq, and Hero. It’ll be interesting to see what phones make the list as time goes on, and how many Android handsets can make the cut.

So in the end, the report doesn’t tell us anything we don’t already know. The Android army is slowly catching up to iOS devices. And, keep in mind that we haven’t really even seen what the little green robot is going to do once the flood of upcoming tablets hit the market this holiday season and early next  year. Also, Windows Phone 7 is right around the corner, and we’re wondering what Microsoft will do to other smartphone operating systems’ market shares.

In any case, iOS and Android are ruling the market in the US. Is it a little too late in the eyes of the consumer to welcome the newcomer, WP7? We don’t have much longer to wait to find out.

Apple is seeding out an iOS 4.2 beta 2 to developers and it should have all the goodies we're expecting...