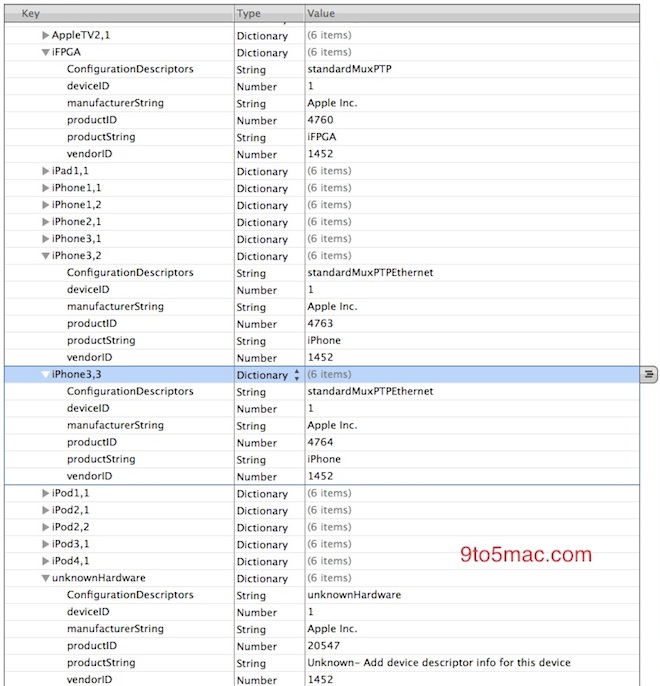 The iPhone 4 that we all know and love (or hate) is actually called iPhone 3.1 when referenced in firmware files. Don’t ask me why, I’m not an Apple Engineer. That being said, the latest firmware for Apple’s TV product shows support for three additional Apple products that we’ve yet to see: iPhone 3.2, 3.3, and 20547. What could those three things be?

Let’s take a moment to speculate. Say one of them is the CDMA Jesus Phone, the one that will work with Verizon’s superior network and will make AT&T churn a few hundred thousand customers once it hits the streets. If it is the CDMA variant then it’s just the same iPhone 4, but with a different radio inside. That leaves 2 more devices. The second, iPhone 3.3, could that be a variant with a different sized screen? With everyone getting their panties in a bunch over these monstrous 4.3 inch Android devices hitting the market, is Apple going to try and compete in that space? It’s plausible, but I don’t really think so. Guy says it’s an iPhone with a keyboard for the business sector. As pleasant as it is to type on glass, this coming from someone who went from a Nokia E71 to a Google Nexus One, there are still people out there who swear by plastic buttons.

Then there’s the third and final device, 20547. With rumors that Apple is going to come out with a brand new MacBook Air by the end of this year, and that it’ll have an 11.6 inch screen, could it be the first product to feature Apple’s iOS as well as Mac OS X? That may sound like a geek’s dream, and not very easy to sell to consumers since switching between the two operating systems is going to have to be easier than opening a refrigerator door, but if anyone can make it happen, it’s Apple.

The University of Leeds is giving all 520 students in their fourth or fifth year studying medicine a free 16...