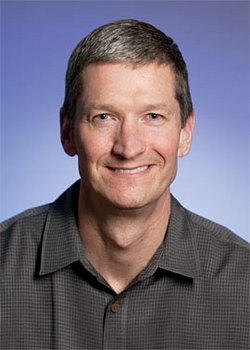 Tim Cook, COO of Apple and Steve Jobs’ right hand man, is rumored to be eyeing the CEO position looking to be filled by Hewlett-Packard. Ever since Mark Hurd’s immediate resignation at HP, the company has been looking for new leadership. What’s the likelihood that Cook would actually leave Apple for HP?

I say it’s not very likely. Cook is poised to become CEO of Apple in the event of Jobs’ departure, and pretty much ran the show during Jobs’ leave while he recovered from his liver transplant surgery. Unless Cook wants to become CEO of a company sooner than Apple would allow, and HP makes an offer he can’t refuse, it seems far more likely that Cook will stay in Cupertino.

This isn’t the first rumor of this kind, as reported by BusinessInsider:

This isn’t the first time a rumor swirled around Cook and a high profile CEO gig. In December 2009, GM was said to be looking at Cook for its open CEO role. Obviously, that didn’t happen.

We wouldn’t put too much stock into this rumor for now because of how unlikely it seems, but I’ve seen crazier things happen.

[Update]
What didn’t seem like much of a plausible rumor turned out to be false, according to Barron’s. The site reports:

Not true, says Gleacher & Co.’s Brian Marshall, who follows Apple. He called me a short while ago to say he’d just run into Tim Cook in Palo Alto, had coffee, and asked him about the rumor.

“Tim Cook will not be going to HP, he loves Apple,” Marshall tells me Cook told him.

So there you have it. Cook will be sticking around at Apple for the forseeable future.

Rumor: Amazon working on an Android tablet to complement its App store?

Earlier, a rumor out of TechCrunch suggested Amazon was launching its own App store for the Android platform. Hot on...