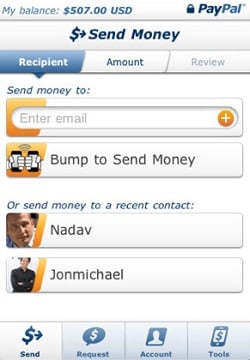 There is nothing that makes you feel like you’re living in the future than using your smartphone to deposit a check. Pretty soon, you’ll be able to use your PayPal app to do just that.

Speaking at the TechCrunch Disrupt conference, PayPal executives said you’ll soon be able to use your iPhone to take pictures of the front and back of the check and have the amount deposited into your PayPal account. Look for this new feature to arrive in an updated app in a day or two and I would hope that it will come to the Android PayPal app before not too long.

It’s definitely a pretty cool addition to the PayPal app but I don’t know many people who deposit checks into that account. I’m sure there’s some demand for it though and I applaud them for including this feature.

PayPal has not been messing around on the mobile side of things, as it routinely updates its apps with cool new features like Bump-to-transfer. The company said it expects up to $500 million worth of mobile transactions this year and that figure will only grow as smartphones become more prevalent.

This isn’t the first time we’ve seen this type of technology in iPhone apps, as Chase has an app which also lets you deposit checks by taking pictures. It seems to work pretty well but we’ve heard that these checks take a while to clear.

I’m fairly certain the first bank to use this type of technology was USAA’s iPhone app. Hopefully, this convenient feature will hit all the major banks and platforms soon enough.

As with mobile payments in general, there’s still a bit of mass-market hesitation using these types of programs. But if these companies show that it is secure, then the convenience will quickly overcome those concerns.