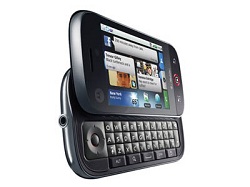 We’ve seen the Motorola “Begonia” pop up in inventory lists before but a few new details about the Android-powered device have just been leaked and this could be the followup to the Cliq.

According to Engadget, the Motorola Begonia could be called the Cliq 2 and it will launch with Android 2.2. Like the Motorola Cliq, the Begonia will have MotoBlur as an interface layered on top of Android.

We first saw MotoBlur at the Mobilize conference last year (which I happen to be at today) and we found that it has some decent ideas on how to display information but it’s just a mess overall. Thankfully, it has been toned down on devices like the Droid X, so maybe MotoBlur 2.0 can actually add a bit.

Engadget also says that the keyboard will feature a redesign that’s “interesting.” It should be one solid piece with no gaps between the keys.

Another few features which should please T-Mobile Android fans is that the Motorola Begonia/Cliq 2 will have WiFi hotspot feature. This was sadly lacking in the high-end T-Mobile G2.

It also looks like the Motorola Begonia or Cliq 2 will have the ability to make calls over WiFi. T-Mobile has been pushing UMA calling for a while now but it hasn’t seemed to play a factor with the carrier’s Android lineup. Hopefully, that will change with this new product.

So, whatever this device is named, it does appear like it will be packed with some decent features but it will still be a mid-range smartphone. Motorola seems to know how to knock it out of the park with its Droid lineup but it’s mid-range phones like the Devour leave a lot to desire.

We’ll be following this one as more information is avaialble. In the meanwhile, what do you think about WiFi calling with Android? Let us know in the comments.