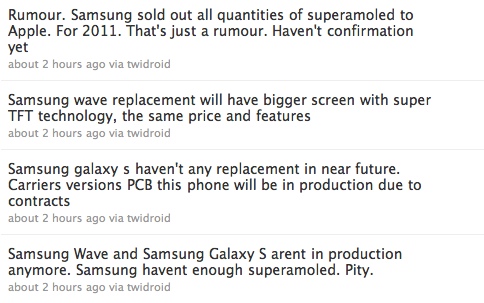 A rumor based upon a series of tweets by Eldar Murtazin suggests that Samsung may have halted production of its Galaxy S and Wave handsets. The unforeseen stoppage is reportedly the result of a shortage of Super AMOLED displays for its popular Android and Bada-powered handsets. These two details, though unfortunate, are reasonable as AMOLED shortages have been common this year. Both the HTC DROID Incredible and EVO 4G were in short supply due to HTC’s inability to secure enough AMOLED displays to keep up with production. The Taiwanese handset manufacturer switched to SuperLCD technology as a compatible and abundant replacement.

While HTC and other manufacturers face a dearth of AMOLED displays, Samsung has been able to outfit its handsets with AMOLED technology as it is the world’s largest producer of AMOLED displays and used this pipeline to stock its handsets first. Based upon this scenario, one would assume that the Galaxy S and Wave are selling so well that the Korean manufacturer is exceeding its capacity to produce AMOLED displays and had to cut back on production. Sounds reasonable, but that is not the theory put forth by Murtazin.

According to Murtazin, Samsung’s delay in Wave and Galaxy S production is the result of Samsung selling a large quantity of AMOLED displays to Apple for 2011. As a result of this volume sale, the Korean manufacturer is switching its handsets over to SuperLCD. Samsung and Apple has a sordid recent history. The Korean manufacturer did claim that its Super AMOLED displays are superior to the iPhone’s Retina display, but Apple reportedly eschewed Samsung because the Cupertino company had concerns that Korean company could not meet demand for the iPhone 4.

Of course, such a rumor is highly suspect and should be presumed incorrect until proven otherwise. Nonetheless, one can not help but speculate on why Sammy would sell off its supply of Super AMOLED displays to Apple.  Did Samsung sacrifice its handsets to snag a presumably lucrative order from Apple? Did Apple paid Samsung an obscene amount of cash to secure high-quality displays for the upcoming CDMA iPhone or perhaps the iPhone 5?  Any thoughts?

A leaked document purportedly details the terms of service for Amazon's rumored Android app store. If this document is legitimate,...