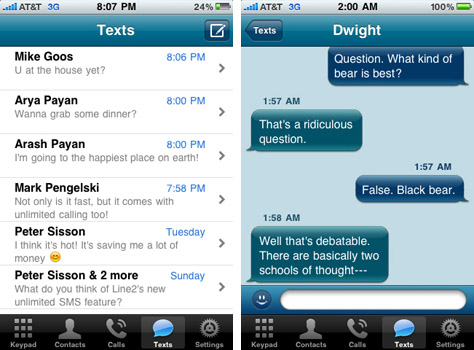 Toktumi has once again updated its iPhone app Line2 to further sweeten the deal. The main new thing of this release (version 3.0) is the introduction of carrier-grade texting, allowing users to have a single app for both low-cost phone calls and texting.

As you may know, Line2 offers users unlimited VoIP calls for just $9.99 (or $14.99) a month, which is an awesome deal, especially for those of you/us that heavily rely on WiFi networks. The best thing about their offering is that it effectively turns the iPod Touch or iPad (if you don’t have the iPhone) into a phone — this is especially useful when used in combination with the fourth generation of iPod Touch that now comes with a microphone.

Line2 works both with WiFi and 3G networks and is way better than any other Google Voice app out there. Moreover, as it sings along the iOS4, Line2 works in the background “push notifying” users of the new messages received and/or incoming calls. Gotta love it!

Gap brings its Casting Call contest to the iPhone users

Gap has partnered with mobile entertainment agency Skyrockit to bring its Casting Call contest to moms and dads on the...