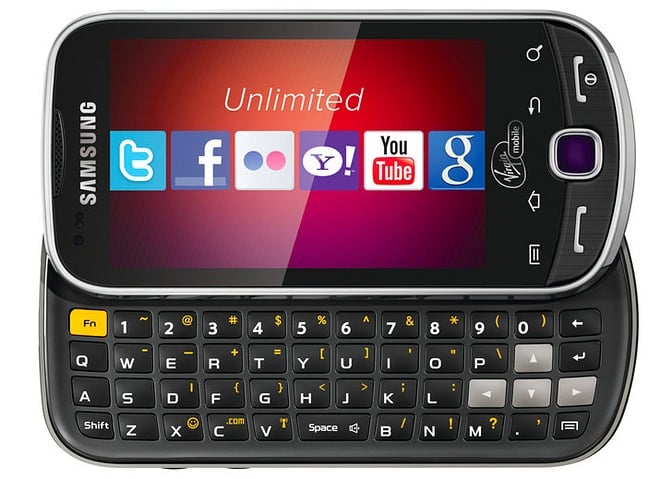 Virgin Mobile users, now is the time to get your hands on the carrier’s very first Android device, the Samsung Intercept. The Intercept may not be the highest-powered phone in the world, but it’s certainly the best handset you can get on the no-contract carrier.

Samsung gave its down-range Intercept a 3.2-inch display, a 3.2-megapixel camera, WiFi (b,g), GPS, and a slide-out QWERTY keyboard (with a dedicated number row! Hint hint, HTC), all running on stock Android 2.1. The Intercept isn’t the powerhouse we’re used to seeing with Android handsets, but it should definitely get the job done for those who are on a budget. The handset has been available at Sprint since July, but now it’s Virgin Mobile’s time to grab the handset.

Available at Target today, and online later this month, the Intercept will run you $249 as opposed to Sprint’s $99 after rebate. Still, Virgin Mobile offers an unlimited plan for only $60 without a contract, where Sprint’s unlimited plan will run you $99 on a two-year contract. Over the course of 12 months, even with paying the upfront price of $249, you’d still save over $300 on Virgin Mobile. Just something to think about.

Expect the device to hit other major retailers later on this month, as well as on Virgin Mobile USA’s website, providing plenty of ways for you to get your hands on the device. If you’re in the hunt for the best Android phone on the market, you will not find it here, but we’re sure that VM customers everywhere will welcome the handset with open arms. That said, usually customers on the cheaper, pre-paid carriers don’t like to pay big chunks of money, so it’ll be interesting to see how the adoption of the Intercept pans out. Nonetheless, it’s a good deal for a decent Android phone, and certainly a great phone for Virgin Mobile.

Congrats on getting your first Android handset, VM, now give us more!

When Google introduced the Android operating system a few years ago it said the goal was to bring the openness...