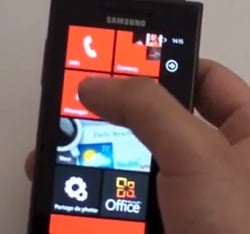 We’ve heard and seen a lot about the upcoming Samsung i8700 but the Windows Phone 7 handset has been spotted in a long video and it gives you a better idea of how the thing will actually run.

As you can see from the video below, that Metro UI can be a refreshing change of pace from what you’re used to from a smartphone. It does seem alive and dynamic – I prefer this to the standard icons-in-a-grid motif of the iPhone and stock Android.

We know that Microsoft is going to put some tight restrictions on the hardware and software that can work with Windows Phone 7 but it appears that Samsung will come out with its own customized hub for weather and stocks. It’s not quite as pretty as the leaked HTC Sense for Windows Phone 7 but it should get the job done.

Other than that, you’ve probably seen a lot of these features when we did our hands-on video of Microsoft Windows Phone 7 but I’d advise you to take a look if you have 13 minutes to kill.

As for the device itself, we’ve heard that it will be called the Omnia 7. This makes sense because the company’s previous Windows Mobile lineup was called the “Omnia,” but it has yet to reach its seventh generation.

The launch of Microsoft Windows Phone 7 is just a few short days away and it is unclear how it will be received. The platform looks very promising to me and the hardware should be on point, but Microsoft will be facing a steep challenge.

The Apple iPhone is well established by now and Apple is nearly guaranteed a blockbuster hit with each revision. Android appears to be on a rocket ship to the moon, established players like Nokia and Research In Motion aren’t going to cede market share without a fight and a Palm with HP pockets could be relevant quickly.

Samsung Galaxy I5510 with Android 2.2 Announced for Europe

Last month, a QWERTY slider from Samsung running Android 2.2 with TouchWiz 3.0 on top was spotted at IFA, and...