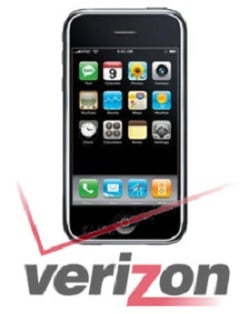 Stop me if you’ve heard this one before but “people briefed by Apple” said the company is mass producing an iPhone for Verizon and the device should be available early next year.

This latest rumors comes from the Wall Street Journal, which says that the Verizon iPhone will use CDMA technology. The report also said Apple is working on its fifth-generation iPhone for AT&T and it could have a different form factor.

When asked about the report at CTIA, Verizon CEO Lowell McAdam said, “At some point, our business interests will align.” That’s pretty much similar to what we’ve heard from Verizon in the past, so I don’t look at that as some form of confirmation.

What’s interesting about the Verizon iPhone is that Big Red’s 4G LTE plans throw a different wrinkle in the equation. The nation’s largest network plans to roll out its 4G LTE network in 38 cities by the end of the year and this should deliver 8 to 12 Mbps download speed.

There’s no word on if the device would be an LTE 4G phone or not. It would seem like a natural decision but you have to remember that the original Apple smartphone didn’t even have 3G, even though it was more built out than Big Red’s 4G network will be by early 2011. We all know that Verizon users are craving an iPhone, but would you buy a Verizon iPhone that’s 3G-only when there’s half a dozen smartphones which are capable of 4G data?

One could also argue that Big Red doesn’t need an Apple smartphone any more, as it has found massive success with its Droid lineup. There will also be questions about how much control and branding could go into a Verizon iPhone – remember, Apple supposedly brought its device to Big Red first but the carrier balked at how much control Steve Jobs’ company wanted.