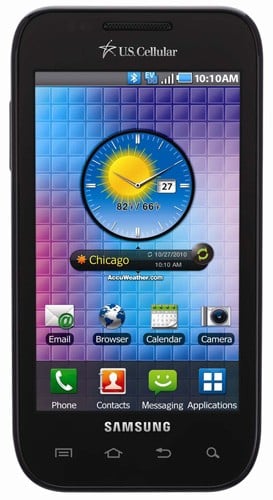 US Cellular announced its second Android handset this week. The Samsung Mesmerize is another version of the popular Galaxy S and features a set of specs that are very familiar: a 4-inch AMOLED touchscreen display, 1GHZ Samsung hummingbird processor, 5-megapixel camera with HD recording, WiFi, Bluetooth 3.0, microSD expansion and a 3.5mm headphone jack. The Mesmerize will launch with Android 2.1 but US Cellular promises that an update to Android 2.2 will be available later this year. The handset will also come with some custom US Cellular content including Your Navigator Deluxe, Tone Room Deluxe, My Contacts Backup, and CityID.

The Mesmerize will join the HTC Desire which debuted earlier this year (Update:The Mesmerize is the third U.S. Cellular Android phone – the Samsung Acclaim and HTC Desire were the first two).

Like most other wireless carriers, US Cellular will be adopting Android in a big way. It has two Android handsets in its lineup and has plans to add two more by the end of the year. These two upcoming Android handset will be manufactured by LG and include the LG Apex and the LG Optimus. The LG Apex is expected to land in November and the LG Optimus in December. For those interested in the Mesmerize, this flagship Android handset will be available from UC Cellular retail stores and online for $199 after an $80 mail-in rebate. Press release after the break.

The Most Disgusting iPhone Charger Ever

Want to lay eyes on the most disgusting iPhone charger you've ever seen in your life? Don't take my word...