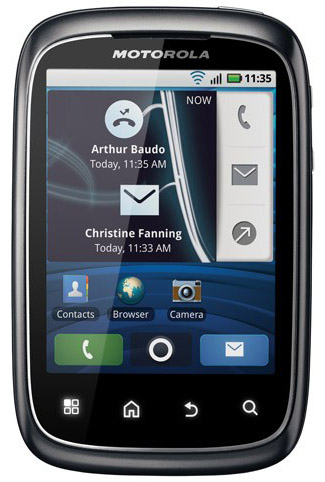 Remember that Palm Pre-esque Motorola XT300 we’ve seen back in August? It has been officially announced by the American handset maker, though that doesn’t mean you can readily have it. The Android-powered smartphone is a Brazil thing only at the moment, where it will be offered as Motorola Spice.

Specs wise, we’re talking about the device that’s pretty much identical to the Flipout, with features including a 3.2-megapixel camera, 3.2-inch QVGA screen, 512MHZ CPU and the infamous Backtrack for one hand use. Android 2.1 is running the show with the MOTOBLUR skin on top of it.

No words on release dates, though we’ll report on that as soon as we find out. Likewise, we’ve no idea whether some carrier from the western world will pick it up — AT&T seems pretty packed with similar Motorola smartphones these days.

As a reminder, the Spice is not the first Android device sporting the Palm Pre like design. Earlier we’ve seen Alcatel launching the similar model, OT-980.

Provider of VoIP software solutions CounterPath is shooting for the Android smartphone users with the release of its Bria app...