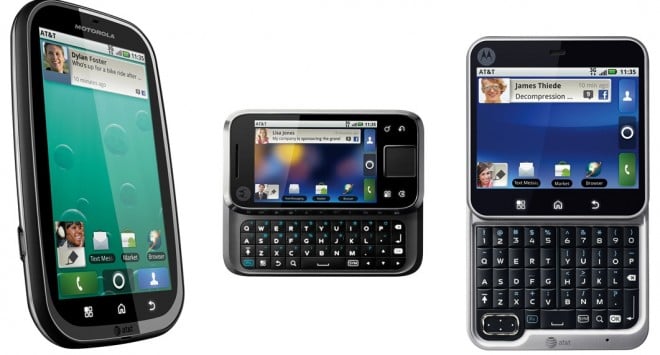 CTIA 2010 brought us a slew of new affordable Android phones, three of which are made by Motorola and going to AT&T. The handsets, the Bravo, Flipout, and Flipside are brought to us by Motorola, sport Android 2.1 with Motoblur, and are all available well under the standard $200 price point.

Motoblur adorns itself on all three of the handsets, so you know that these won’t necessarily be the best Android smartphones around. It seems that Motorola throws Motoblur on their lower-end devices (Devour, Cliq XT), and saves their less-intrusive skins for the higher end handsets they make. Motoblur is something that should appeal to the younger crowd that are into heavy social networking, and that’s where we thought it would stay.

But, throwing Motoblur on the Bravo, the best of the newly announced handsets, makes us believe that Motorola intends to shove it down your throat no matter what age group you’re in. Some may not be too pestered with the kid-like UI, but the only thing worse than the Motoblur UI is the TouchWiz UI on the Samsung Behold 2. Ok, enough UI-bashing, onto the handsets! 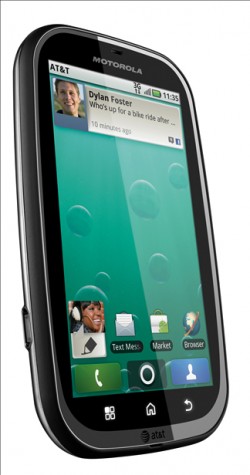 The Bravo is the highest-end of the new budget Android phones to hit the carrier, and looks to be quite pleasing. Its large 3.7 inch display is nice to see, as most of Moto’s lower-end handsets max out at 3.1 inches. We’d hardly call the Bravo a sexy phone, but the specs are attractive for the price. The Bravo packs a TI OMAP 3610 800MHZ CPU,  512 MB RAM, 2 GB ROM, with a 2GB MicroSD card pre-installed, 3 megapixel camera with autofocus, Flash Lite 3, and the standard WiFi, GPS, Bluetooth. The Bravo also comes with DLNA support, allowing you to stream music, video and photos to a HDTV, set-top boxes, and gaming consoles that support DLNA.

The Bravo does have some competition in the AT&T Android space already. There’s the Samsung Captivate and Xperia X10, both of which share a 4 inch display, and higher quality cameras, and faster CPUs than the Bravo, but Motorola’s new handset beats them in price department. The Bravo hits the sweet spot for a higher-end, yet still budget smartphone at $130. The HTC Aria, also at AT&T, is priced the same, but the Bravo bests it with a faster CPU and bigger display. I have a feeling Motorola may have a cheap hit on their hands. 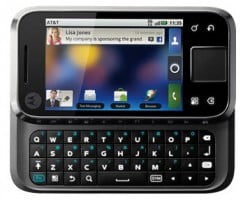 The Flipside should satisfy those who need a physical keyboard, as the handset sports a full slide out QWERTY. The slider’s specs are shaved down when putting it next to the Bravo, but it looks like it will definitely find the way into quite a few hands. The Flipside comes with a 3.1 inch display (320x 480), TI OMAP 3410 720MHz CPU, 3 megapixel camera with digital zoom and image editing, WiFi, Bluetooth, 3.5mm headphone jack, and comes with Flash Lite 3.

The Flipside also has a laptop-like mouse pad, making one-handed operation a breeze. It’s as if Motorola put their useless Backtrack found on the Backflip, and put it on the front of the handset. That way, people may actually use it. The trackpad looks spacious, which may make swiping through the home screens much easier. The Flipside also hits a price sweet spot at only $100, and that’s a pretty nice deal for what you’re getting. This may be a heavy-texter’s dream come true. 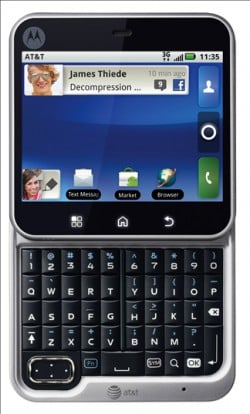 Well, well, well, the Flipout decided to join the party after all. It must have taken it a while to muster up the courage, but it did, and will be hitting AT&T shelves later this month. To tell you the truth, ever since we saw the Flipout a while back, we can’t say that we were terribly impressed. This handset looks like it’s aiming itself straight for the tweenagers, and that’s completely fine. Motorola is definitely covering all bases, and their smart to do so, but the Flipout is just plain strange looking.

The Flipout sports the same CPU as the Flipside, the TI OMAP 3410 720MHz. So even for its puny size, it should be pretty fast. It also shares the same 512 MB RAM, 512 MB ROM, and 2GB MicroSD Card found in the Flipside. The Flipout comes with a 2.8 inch display, ensuring that you’re web-browsing experience won’t be a pretty one, even if Moto was nice enough to load Flash Lite on the thing. The handset stays true to its name by revealing the keyboard when the screen is turned to the left. But the Flipout’s size is pretty awkward, and I wouldn’t be surprised that if you actually did find someone using this thing, that they would have the keyboard out just so they can get a good grip on the thing.

It’s not all bad, the Flipout will satisfy even the cheapest of us coming in at a dirt-cheap price of $80. It may be an expensive stocking stuffer, but your 13 year-old will surely appreciate it. Expect to see the Flipout hit shelves on October 17th.

So there you have it, folks. Not only is it actually the year of Android, it certainly is, but it’s also the year of the budget Android phone as well. These, along with the other handful of cheap Android devices set to hit this holiday season will only further Android adoption, allowing it to continue gobbling up market share of its competitors.