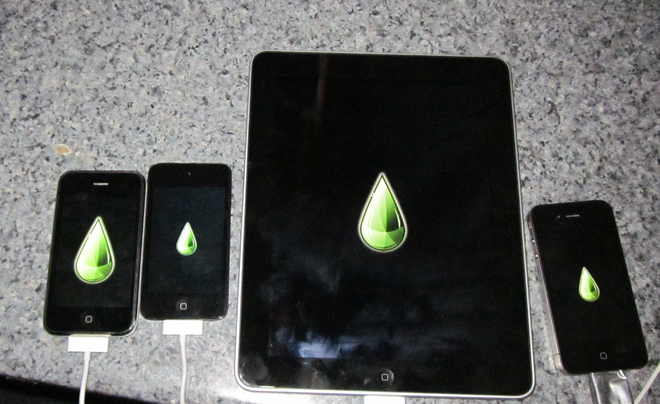 Geohot stole the show and released his limera1n jailbreak tool for iOS devices one day before the chronic dev team was slated to launch its greenpois0n tool on 10/10/10 at 10:10:10 AM GMT. The limera1n tool uses a different bootrom exploit than its greenpois0n counterpart and is reportedly compatible with the iPhone 4, , iPod touch 3G/4G, and the iPad. The Apple TV is also supported on paper but there are no apps for it and no real reason to jailbreak it at the point. It is an unpatchable and untethered jailbreak for those who follow the jailbreaking scene.

That is the good news, now for the bad news. Limera1n is only available for Windows, though, a Mac and Linux version is coming soon. It also does not support devices running iOS beta builds, only official builds from 4.0-4.1 and beyond. Though the iPhone 3GS is listed as a compatible device, a bug list notes that the “3GS new bootrom is broken, fix pending”. So iPhone 3GS owners would be wise to stay away from this tool until this fix is released.

MuscleNerd of the iPhone dev team also warns folks who use his ultrasn0w unlock tool to stay away from limera1n as you may lose your unlock. Engadget also reports that one of their iPhones lost the App store, maps, and calendar app after running the limerai1n tool. I ran it on two iOS devices without any problems so your mileage may vary.

This release by Geohot has ruffled some feathers in the iPhone development community. He upstaged the work of the chronic dev team and made a slight dig at them with an off-hand comment on the limera1n webpage, “released today to get chronicdev to do the right thing”.

After a few mini-explosions of anger and dismay made public on twitter, the chronic dev team confirmed that they will re-work their greenpois0n jailbreak tool to use Geohot’s exploit, not SHAttered. Per the iPhone dev team’s request, this move may delay the greenposi0n tool but will save the SHAtter exploit for future use if needed. The controversy does not end there, though. It gets even juicier.

Playing out like a daytime soap opera for nerds, the chronic dev team is accusing Geohot of deceiving comex to beat them to the punch. According to the circulating gossip, Geohot obtained help with untethering from comex. In return for this help, Geohot reportedly agreed to release his jailbreaking tool after  greenpois0n had hit the scene. As we all know, that is not how it played out. Disclaimer: this reported deception is all hearsay so take it with a grain of salt.

In the end, Geohot played his hand first and subsequent jailbreak tools will need to use his exploit. If other dev teams chose to release their own tools that reveal new exploits, its opens up the possibility that Apple could fix both exploits in one release. Keeping the SHAtter exploit under wraps is good for the Apple community in the long run, not so good for the chronic dev team whose greenpois0n tool now needs a major re-write.

Despite all the controversy, the Apple community now has a jailbreak tool for the latest versions of iOS and beyond. Interested parties can download the limara1n tool here. If you dare to take the plunge, share your success or failures with us in the comments.

Here's one for the iPhone ownin' exercise fans who at the same time love Nike brand and their sports equipment......