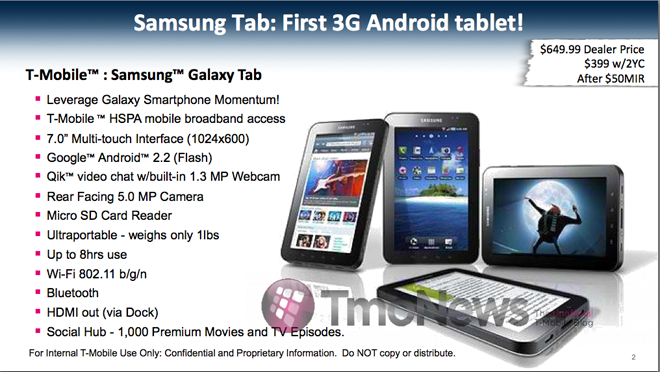 With a launch that is imminent, all the details on the Samsung Galaxy Tab are slowly being revealed. The specs have been unveiled, carriers confirmed, and even some hands-on previews have been published. All we are waiting for is the elusive pricing details from Samsung. While Samsung remains silent on the subject, a tipster broke the ice by leaking an internal T-Mobile launch document that reveals the pricing for this hotter than hot tablet from Samsung

If this leak is the real deal, then our greatest fears may be confirmed – the T-Mobile Galaxy Tab will come in at a price tag that is slightly higher than the Apple iPad. The leaked T-Mobile document suggests that the Galaxy Tab will be available for $399 with a $50 mail-in-rebate and a two-year contract. The unsubsidized price comes in at an equally high $649, a price tag which puts its above the $629 for the 16GB iPad WiFi + 3G.

The launch date is not included in this leaked document but we can look back to Friday’s leak to predict that this Samsung tablet will launch on T-Mobile around the 14th of November. A previous leak from Sprint suggested that the Galaxy Tab will launch for $399 on November 14th. Full retail on the Sprint tablet will reportedly come in at $599, which is $50 less than the T-Mobile version. A detail that suggests the carrier is in the driver’s seat when it comes to the final price of the tablet device. Verizon and AT&T’s pricing is not yet known, but with the tablet’s worldwide launch fast approaching, these important details will be made official soon.