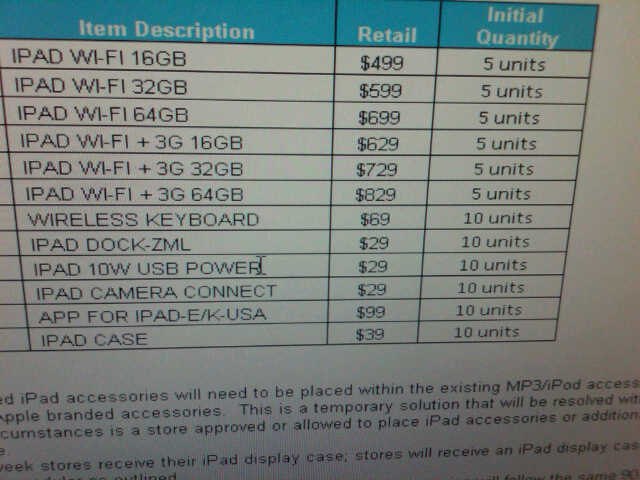 Folks looking to buy an iPad may be able to grab some socks, a gallon of Great Value Milk, and an iPad the next time they stroll into their local Wal-Mart store. Back in May, Wal-Mart’s Gary Severson, VP of entertainment in the US, hinted that the retailer would be selling the iPad by the end of the year. Recently leaked documents suggest that this rumored launch date is approaching very soon.

A leaked internal email emerged last week and provides us with the salient details surrounding Wal-Mart’s iPad launch. According to the leaked document, Wal-Mart will carry all six models of the iPad, which include both the WiFi and 3G-enabled versions in 16GB, 32GB, and 64GB capacities. Wal-Mart will also be offering a variety of extras such as the iPad camera connect, USB charger, and AppleCare for the iPad. 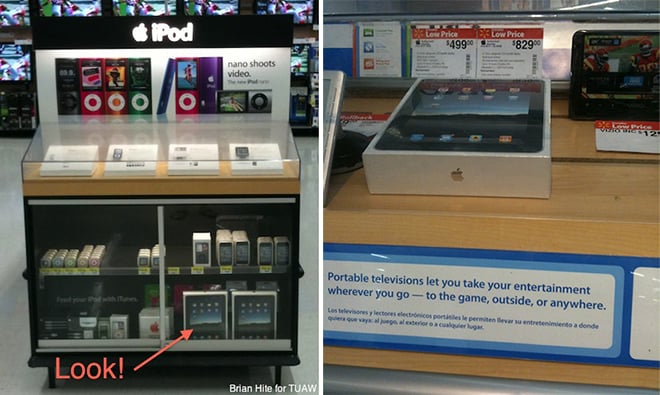 Savvy Wal-Mart customers (and no, that is not an oxymoron) have spotted Apple’s tablet device on the shelves of the retail giant. In the above left photo taken at a Wal-Mart in Searcy, AR , the iPad boxes can clearly be seen at the bottom right of the display case. The iPad is not included on the top shelf as an “on-display” device which suggests the boxes are standing inventory set aside for the big launch. In the right hand photo taken at a Wal-Mart in Denver, Colorado, the iPad is front and center on the display in what is presumed to be a case of early unveiling.

The iPad is expected to land at Wal-Mart stores around the US starting next week. The retail giant will bring the iPad to 1,000 Wal-Mart stores by the end of October and another 800 stores by the end of November. Wal-Mart will be competing with Target which recently launched the iPad and Amazon which offers the iPad through third-party resellers. Of course, you can always snag an iPad from the official Apple store which can be found nationwide. It’s up to you whether you want to stroll out of the store with your iPad enclosed in a fancy fruit-emblazoned bag or a standard plastic bag next to your bananas.

[Via AppleInsider and TUAW]

Video: iPad Destroyed with a Shotgun

Ever shot an iPad with a handgun? How about a shotgun? I highly doubt it. That said, if you have...