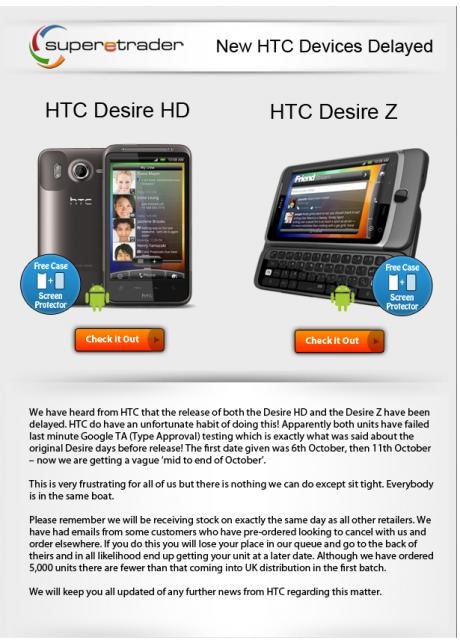 The much anticipated HTC Desire Z and Desire HD, announced last month, are due to hit the market a little later than originally anticipated. According to several online retailers, the pair of HTC devices failed to receive a badge of approval from Google for unspecified reasons. Android is open and all that jazz, but if you want to offer Google services with your Android devices, and especially if you want the Google logo on the hardware of your device, you need to jump through a few loops before you’re bestowed permission. Supposedly the same thing happened to the first Desire, also known as the Nexus One, but with HTC’s Sense UI on top.

We’re eagerly waiting for these devices to hit the market and we have to applaud HTC for announcing devices and then shipping them rather quickly, even if this “delay” is in the order of a few short weeks. Other device manufactures like Nokia and Samsung announce hardware and then ship it months later. The most recent example is the Nokia N8, announced on April 27th, but only reaching stores right now, and even then in limited geographies and quantities.

Back to HTC, are you going to pick up either of these two? I was eye balling the Desire Z, was going to sell my iPhone 4 to buy it, but then I thought to myself that I’d rather wait for the real next generation of devices. The stuff with higher resolution screens, newer versions of Android, you get the picture. The Desire HD is far too large and to this day I have difficulty understanding this trend towards increased screen sizes. Even the Samsung Galaxy S, at 4 inches, looks like a brick and quite awkward to use. Where’s the iPhone Nano? Where’s the 3.2 inch Android devices? Where is people’s sanity?