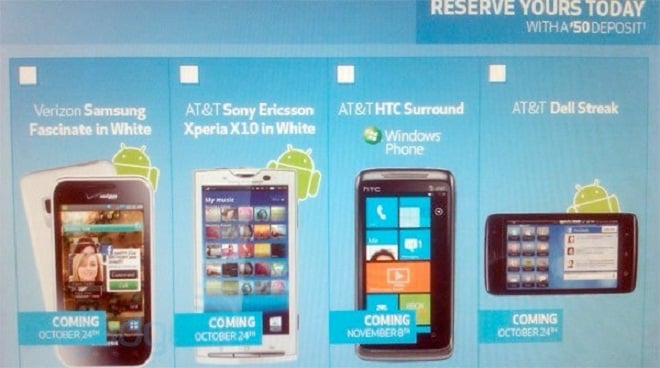 Best Buy is bringing the Android heat with the smartphones and it will soon have a white Samsung Fascinate, Sony Ericsson X10 and the Dell Streak later this month, according to a leaked promotional flier.

The Samsung Fascinate is the Verizon version of the Galaxy S lineup and it’s quite a nice Android phone. I’ve been using it as my primary device for the last few weeks and I’ve been quite impressed with it. The fact that Samsung is able to create a white version could be a tad bit of egg on Apple’s face because it has constantly struggled to make a white iPhone 4.

As for the specs, the Samsung Fascinate has a large, gorgeous 4-inch Super AMOLED screen and this thing is absolutely gorgeous. The colors are crisp and vibrant and the blacks are deep and rich.

One thing that may bug you about the Samsung Fascinate is that it uses Bing search and Bing Maps instead of Google’s products. That’s fine for the most part but Bing Maps isn’t as flushed out as the Google alternative.

Best Buy will also be landing the Android-powered Xperia X10 and we weren’t too impressed with the international version we reviewed. I felt that the custom user interface software was a bit too clunky and didn’t add much but the AT&T version should be improved.

The Dell Streak is also an interesting Android phone because it sports a massive 5-inch screen. That makes it half smartphone and half tablet, so let’s just call it a “smarblet.”

Everyone I know who owns a Streak does love the device, even though it doesn’t have the latest version of the Android software. Dell said it will be bringing Android 2.2 to the Streak in the not-too-distant future but we’re still unsure of the timetable.

Tweetdeck out of beta – in Android Market

One of the most anticipated Twitter applications for Android, Tweetdeck, is now available for download in the Market. After a...