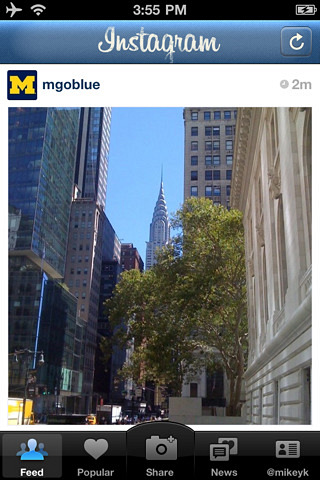 If you’re an iPhone user, and you love taking and sharing photos, you need to get Instagram. Already a user? Then you know what I’m talking about, but if not, here’s how it works: you follow and are followed by your friends, you snap pictures, adjust the photos with a handful of filters and then share them with your social networks of choice. It’s that simple. It’s so good, in fact, that Instagram had over 100,000 users just six days after it hit Apple’s App Store.

Here is what’s impressive about the number, as reported by TechCrunch:

Now, 100,000 may not seem that impressive in a world where Facebook has 500 million users, but again, that’s after just one week in existence and only being available on the iPhone. You can’t even sign up on their website yet, you need to get the app to be a user. As a point of comparison, it took new media darling Foursquare seven months to get 60,000 users.

The direct comparison with Foursquare, which everyone and their mother seems to use, is what makes this impressive. Surprisngly, you can only get it from the app store, and not anywhere else. You can’t even become a user online.

The frequency at which photos come in, and where they’re coming from, also shows that it’s not the tech nerds picking up on Instagram:

“We’re getting one picture taken every two seconds from places all over the world,” co-founder Kevin Systrom tells us. I asked him about usage outside the tech bubble and he noted that only about 12 percent of their photos are coming from areas around tech hubs like San Francisco and New York City. He also says that activity in both Europe and Asia has been strong and notes that the highest usage areas aside from the U.S. are Hong Kong, Spain, Germany, and Australia.

And best of all, it’s free in the iTunes App Store. Don’t hesitate to grab it!

Verizon iPhone to hit in March 2011

Stop me if you've heard this before but a Verizon iPhone is on track for early next year. Now, an...